The first thing you notice about Taiwan are the mountains. I never knew there would be mountains. As an American growing up in the 1970’s “Made in Taiwan” meant inexpensive products created under sweatshop working conditions in factories. In the back of my head I imagined Taiwan as a place with lots and lots of people working in tight, horrible working conditions, sweating away making cheap toys, and transistor radios, and Panasonic TV’s. I never thought too much about the terrain but if you’d asked me, in hindsight I’d have said, ‘flat’. Like Northeast New Jersey. Taiwan is nothing like that. I’ve never been in the factories, but the land is enchanting — mountainous and almost tropical. 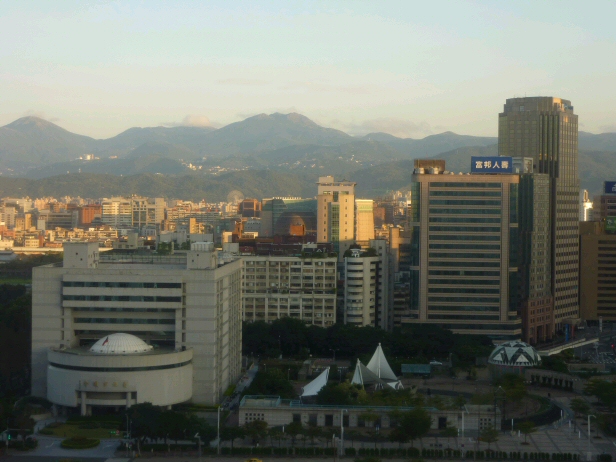 It is an 18-hours-in-the-air flight from NYC to Taiwan — first you are 7 hours in the air before a touch-down in Anchorage, Alaska for an hour and a half refueling, and then 11.5 more hours in the air to Taiwan. I left at 9pm on a Friday night out of JFK, and landed at 6:30am on a Sunday morning. My Saturday disappeared. It is a 13 hour time-zone difference between East Coast US and Taiwan; meaning when it’s 7pm here, it’s 8am tomorrow there. 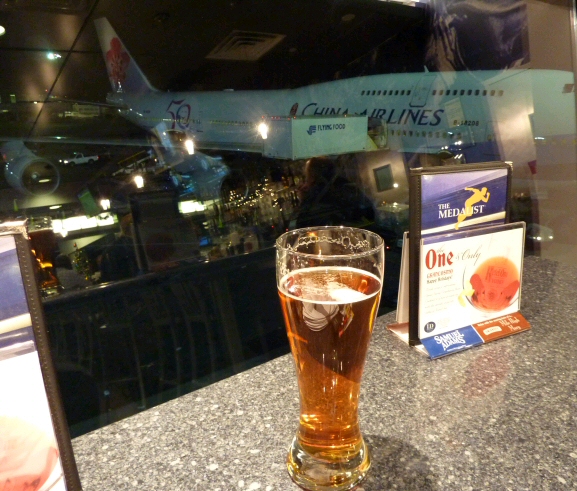 A Sam Adams on a Friday night to kick off 18-hour in-air flight to Taiwan, at JFK. In background is 747 of Air China that I would be flying in.

One of the very cozy features of the flight was that hour-and-a-half stop-over in Anchorage, Alaska for refueling. China Airlines (operated by Delta) ushered us into a remote terminal of the airport, gave us a pass upon leaving the plane, and told us we’d be re-boarding in an hour and 15 minutes. Great chance to charge the batteries on the laptop, find a place on the second floor of the small terminal, and lie down on the rug to nap. You appreciate lying flat after having been sitting in an aeroplane for 7 hours. With 11.5 hours in front of us, it was time to appreciate the prone position. Already jet lag was causing confusion; it was 6:30am in my mind, but only 2:30am in Alaska; the workers at the food stand were encouraging me to buy a beer when I stopped up for a coffee. Beer was the last thing on my mind but to them the Friday night was just ending, and they were readying to go home. 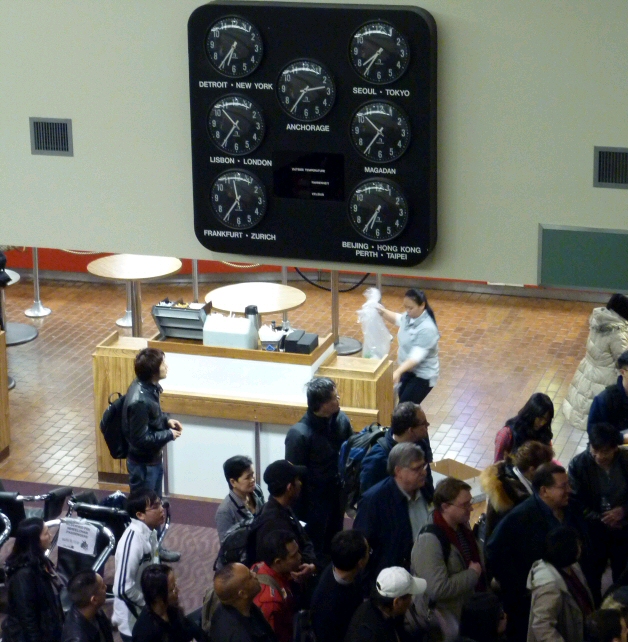 Passengers line up to re-board plane at a remote terminal of Anchorage Airport; do you see the second floor above? That’s the floor where I slept for 45 minutes. Very cozy.

First thing I did upon arriving in Taipei, after getting my baggage, before I even tried figuring out how to get to the hotel, was to stop down for an espresso. Espresso’s outside the US are usually over-the-top fantastic; the richness of the coffee, something way beyond what Starbucks or your typical Italian restaurant in NYC will serve. This was China, I thought — they don’t serve coffee; it’s all about tea here. There was one place in the entire airport outside the luggage area — CasaMila Cafe — that sold coffee. I asked for a double espresso, and wasn’t disappointed. Over the top fantastic. The trip was off to a good start.

So as I looked around on the public bus headed for the city from the airport, I was surprised to see mountains. This was an island after all; I knew that coming in. Lush green mountains all around us as we rolled into town on the private bus, a 40 minute ride from the airport to Taipei. It looked.. tropical. This was a surprise. Then finally I saw factories as we hit town. But all around Taipei, you could see the mountains. I arrived at my hotel – the Grand Hyatt Taipei Hotel – at 8:30am. The room wouldn’t be ready until 1pm, earliest, I was told. So I had some time to kill. I asked the front desk where I could get some breakfast outside the hotel, and they told me there was a place across the street that was good. I left my bags with the concierge and set off to experience Taipei. 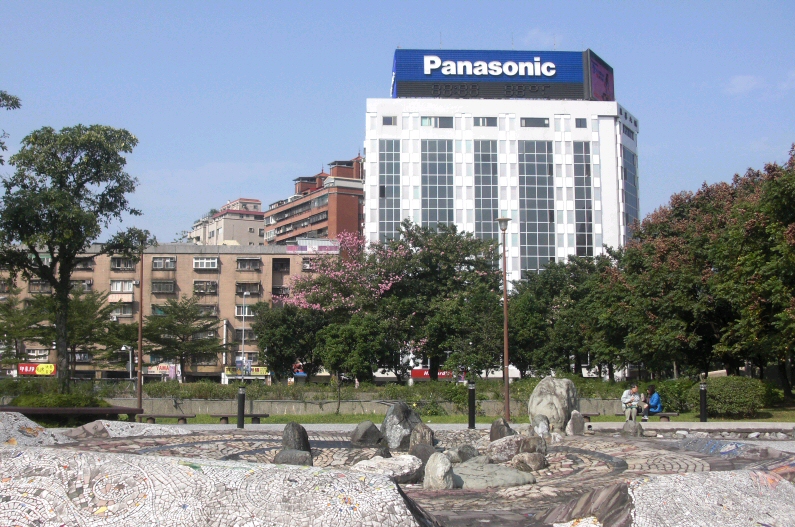 The breakfast place didn’t seem like much at first. A small nook; but they had all the requisite American breakfast dishes – sunny-side up eggs, toast, bacon, French toast, pancakes, milk tea. I ordered French Toast and a milk tea and grabbed a spot at a table on the sidewalk outside. There were others sitting outside as well (there was no place to sit inside the nook). It was a tropical 75 degrees outside, with a rising sun burning down. Man it was beautiful out. Tropical bushes and flowers were to my right as I sat there watching the traffic go by – swarms of scooter/motorcycles. My French toast and milk tea were served to me – it looked and tasted Great. Very cheap. Breakfast was heaven. I’d be returning to this place. I ordered another round of French toast, and took some pictures. 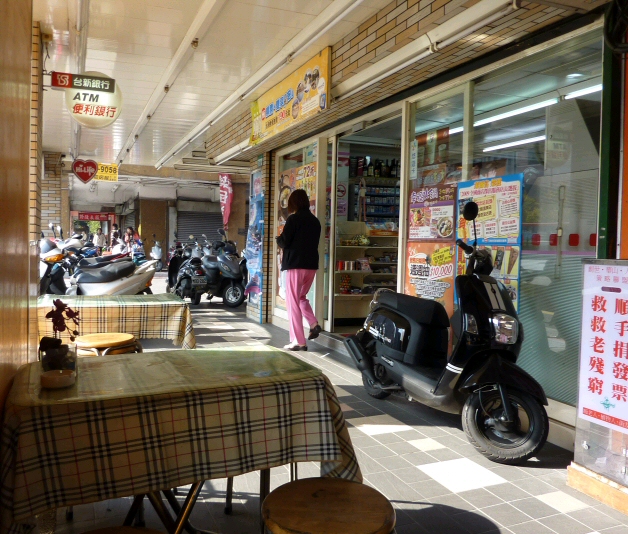 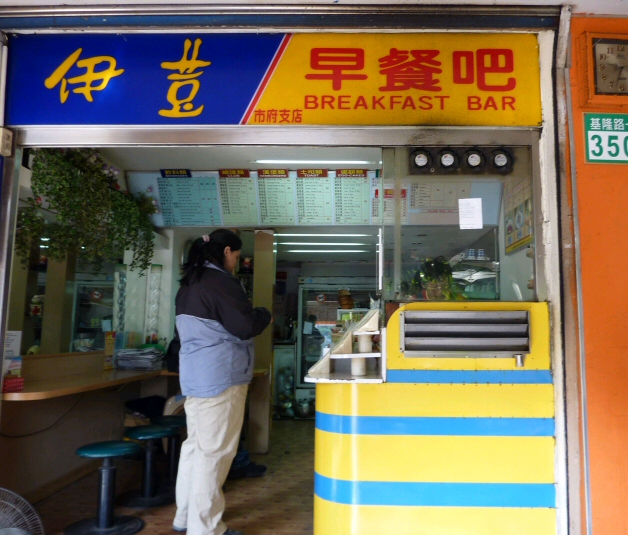 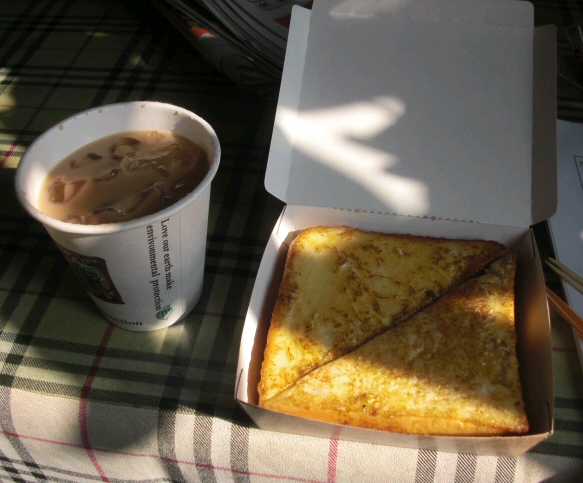 After breakfast I walked around the area a bit; there was a park across the street, the front desk advised. I tried to catch some shut eye there. I worked in the lobby. I went back out to the park. I diddled around. Finally my hotel room was ready at 1pm. 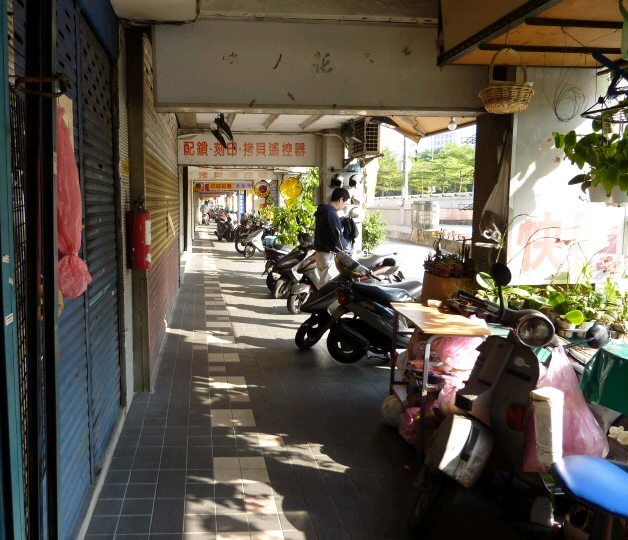 75-degree, tropical weather at 9am on a sunny Sunday morning in Taipei.

I was right next door to this huge building. The receptionist in the lobby told me my room would have a view of it; they were quite proud. I could swear the guy said it was the tallest building in the world, but thought I’d heard wrong. Maybe I’d heard right; I wasn’t sure. There was a view of the huge tower from my room, and it looked familiar; but the room smelled of cigarette smoke, so I asked for another room. (There was no smoking in the hotel; but apparently a neighboring guest had broken the rules. I turned on the fan to the room, but felt nothing, so asked for a new room.) This other room didn’t have a view of the tower, but it did look out over the city with the mountains behind; I thought it was a nicer room than the first one. Turns out that tower was theTaipei 101 Tower, the tallest building in the world. At that point in time – early December 2009, Taipei 101 Tower was the tallest officially open building in the world; Burj Dubai (later renamed to Burj Khalifa) had already surpassed it but wasn’t due to open until January 2010. 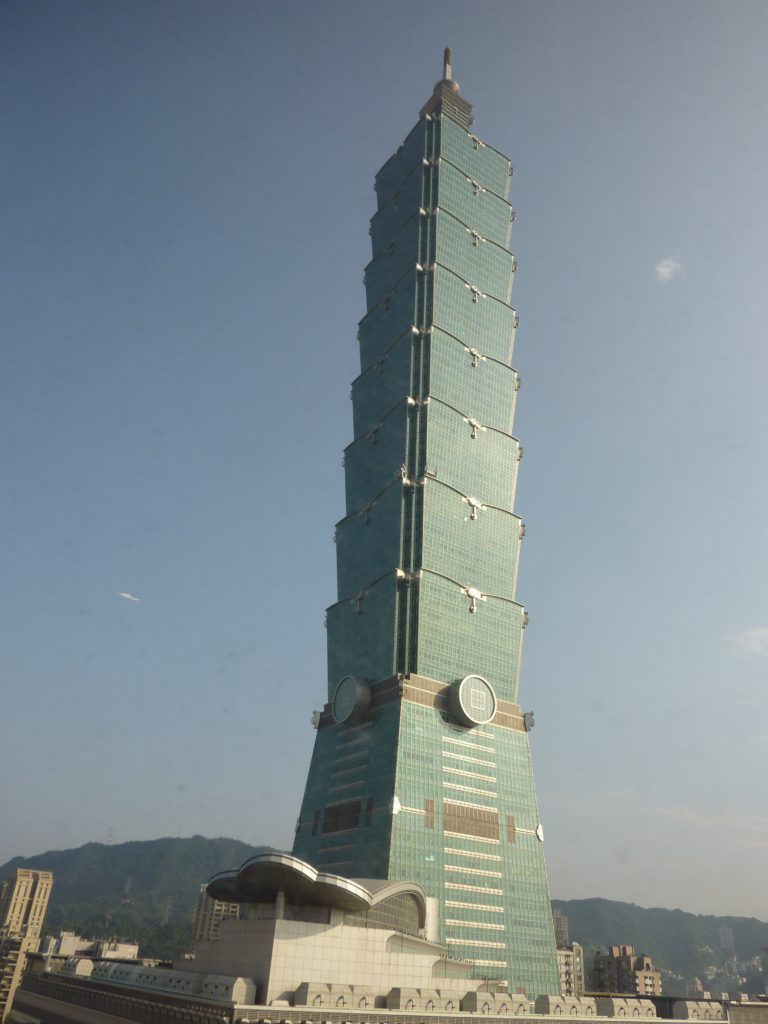 Taipei 101 Tower — when this picture was taken, in December 2009, it was officially the tallest building in the world, even though the Dubai Tower had eclipsed it in height already — the Burj Khalifa in Dubai was still not officially open or occupied.

I crashed (aka fell on the bed and slept solidly for several hours), got back up at 4pm, and went about to explore Taipei some more.

I wandered over to the local park. There on a Taipei Sunday afternoon were hundreds of people; families mainly; kids playing; similar to what you’d see in NYC’s Central Park or Brooklyn’s Prospect Park, except that everyone was Chinese here. There was a huge temple-like building at the center of the park. I found out on the internet when I got back to the US that it was the Sun Yat-sen Memorial Hall. Next to the building, teams of teenagers were independently practicing various dances; as if they were all training for a dance competition. There were a group of 20 or so older folks practicing some form of martial arts; going through their movements in synchronized slow motion. Inside the temple, there were hundreds of people watching some military ceremony; lots of tourists taking pictures. Outside, a Chinese orchestral band was warming up. I envied everyone’s carefree afternoon, and headed back to the hotel to prepare for the coming week’s work. 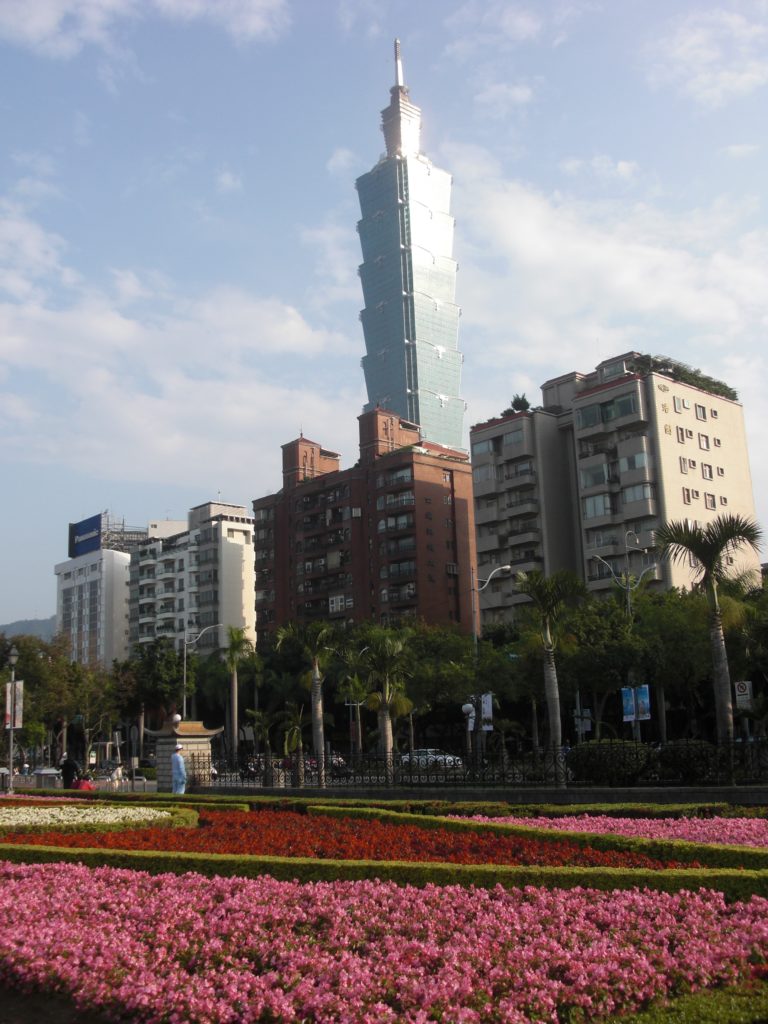 Beautiful flower gardens in public park a few blocks away from the Taipei 101 Tower. 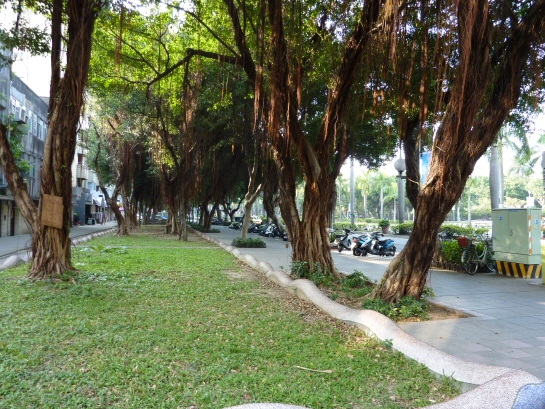 Funky trees on RenAi (JenAi) Road, section 4, across the street from the park and Sun Yat-sen Memorial Hall. These trees were all over Taiwan. Very pretty. 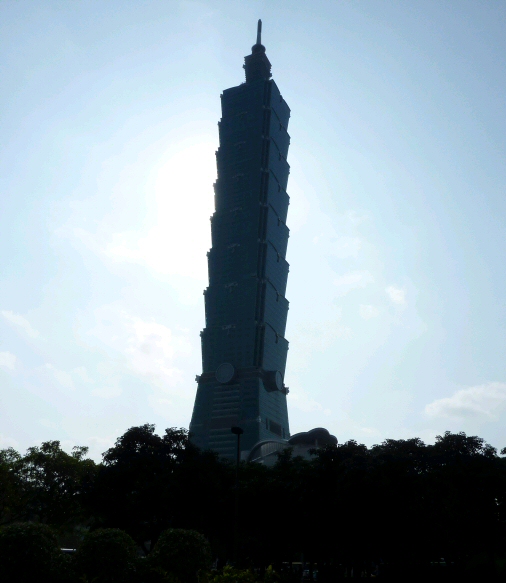 The spire of the Taipei 101 Tower is inspired by Taiwan’s native bamboo plant. 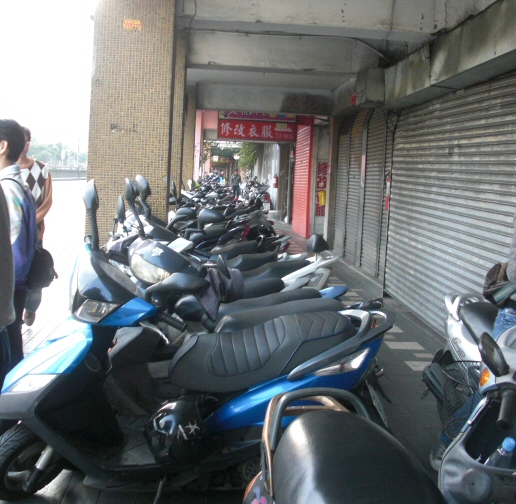 Toyota Corolla’s are the most common car in Taipei; they make up the great majority of taxis that you see. But scooters are king. They are all over the place; sidewalks across from the hotel that I stayed at were maxed out with parked scooters as far as the eye could see. 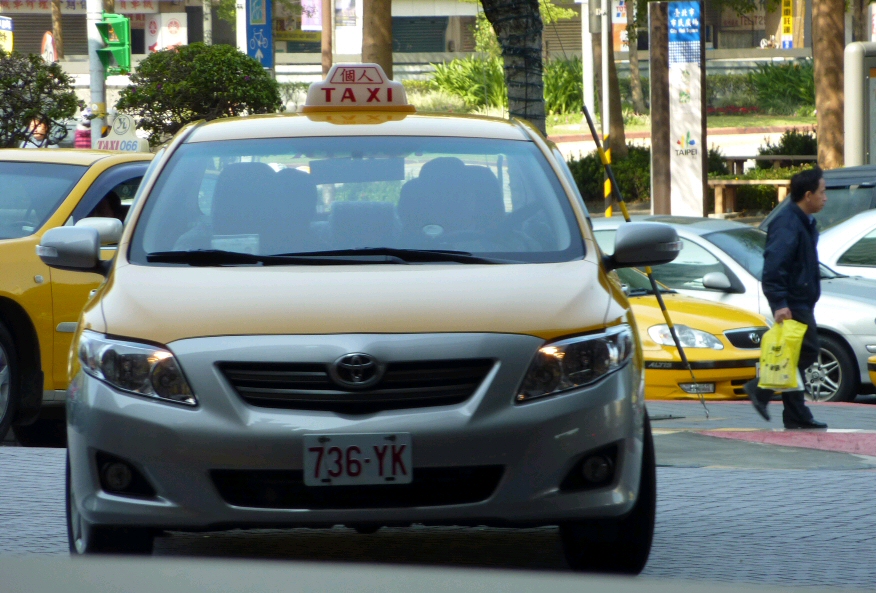 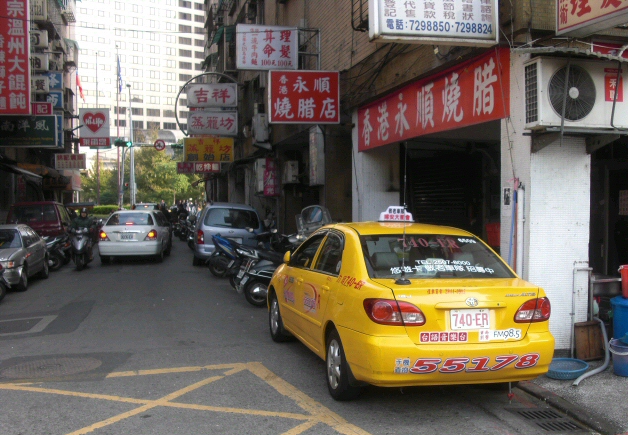 Even though it is tropical out, the Taiwanese in Taipei believe in Christmas. Celebration of it is all over — including the lobby of the hotel that I was staying at, which offered a cardboard fireplace, cardboard bookshelf, fake Christmas tree, beige fireside chair, and plenty of spirit. Incredibly, their fireplace and fireside chair looked a lot like the one this ignorant traveler has at home — except we replaced the beige cloth fireside chair with a red leather one after I saw a red leather one in the Macy’s window on 34th Street in Manhattan 10 years ago. 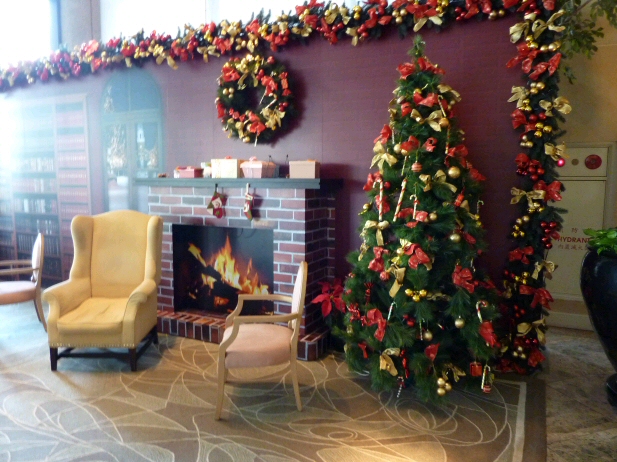 The tropical locale of Taiwan really hit me on my third day there, when, after two days of full-out work indoors and visiting clients, we visited a military base, where the soldiers were all wearing military garb that included khaki shorts.

Taipei is a cosmopolitan city, with many modern skyscrapers (although none nearly as tall as Taipei 101), fashionable shops, Starbucks, and a western-style mall across the street from Taipei 101 that features a huge 6 or 7 story bookstore that stays open 24 hours. Unlike an American bookstore, it featured books written in all kinds of languages. With an hour to kill in between customer visits on my second day there, our Taiwan sales executive proudly gave us a tour of this bookstore; a place he no doubt had spent many an hour on a Friday or Saturday night while the wife shopped. Another mall nearby featured in its basement an extensive array of fast-food eateries with food from all over Asia. Another coworker I was with, from Singapore, took us down into its eateries on both our Monday and Tuesday nights there — a connoisseur of Asian food, he said the eateries in that mall’s basement offered the biggest variety of authentic and excellent tasting Asian food he’d seen anywhere in Taiwan or maybe anywhere. There were eateries from Korea, Thailand, Vietnam, Singapore, China, Taiwan, you name it.

All over Taipei, in the pre-Christmas December while I was there (I was there December 6 through 9) the waitresses in the restaurants, and sales gals in the shops in the malls and at the airport all wore Christmas hats. It was quite cute. 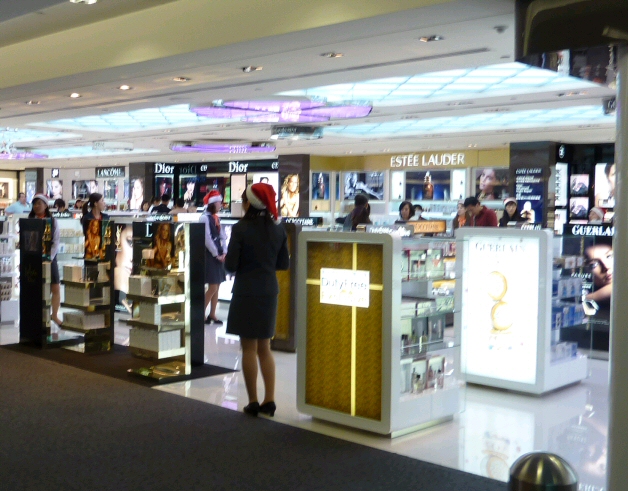 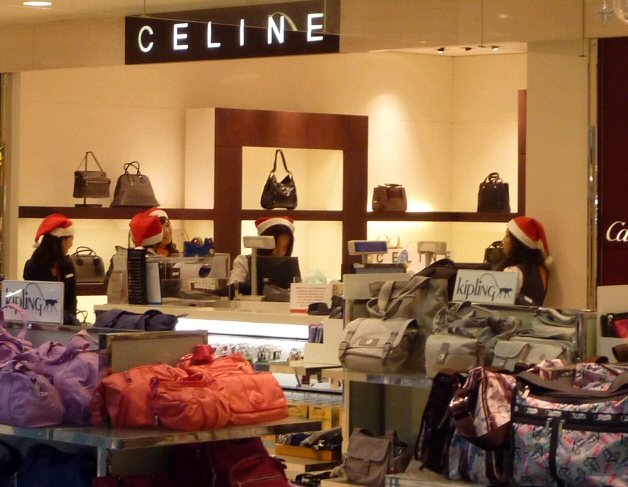 I left on a Wednesday afternoon for the second leg of my flight, a trip to Shanghai. I made a special effort to get another espresso from the CasaMila Cafe in the airport. 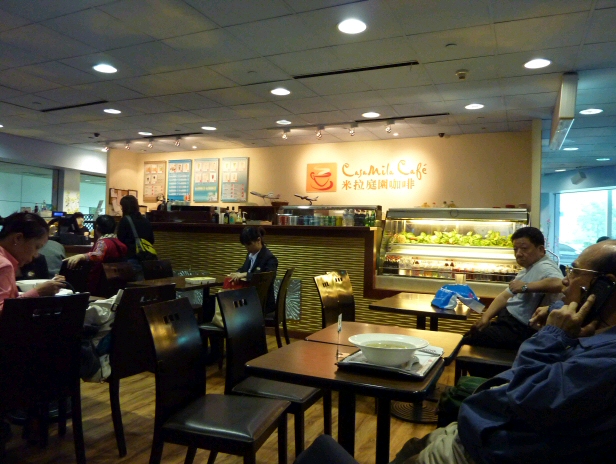 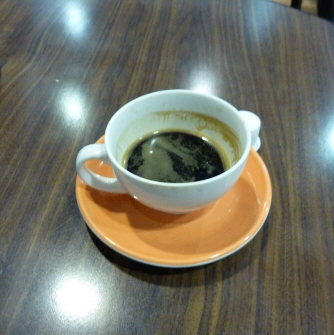 I boarded my 4pm plane and was off to Shanghai, the second half of the trip. 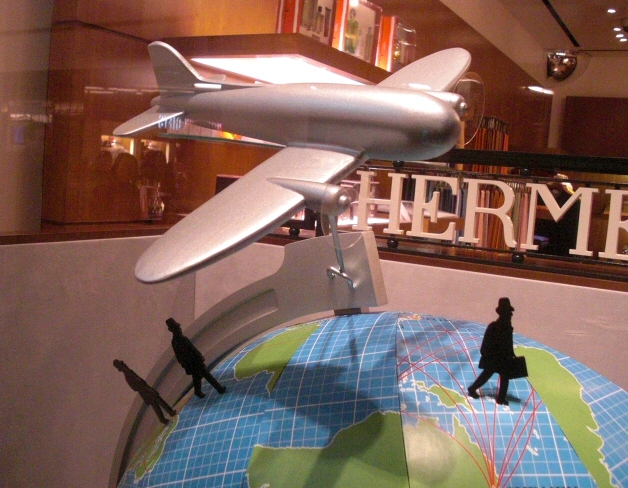 Leaving Taipei, heading for Shanghai. The model is a DC-3; the plane I actually took was a 737 or something. 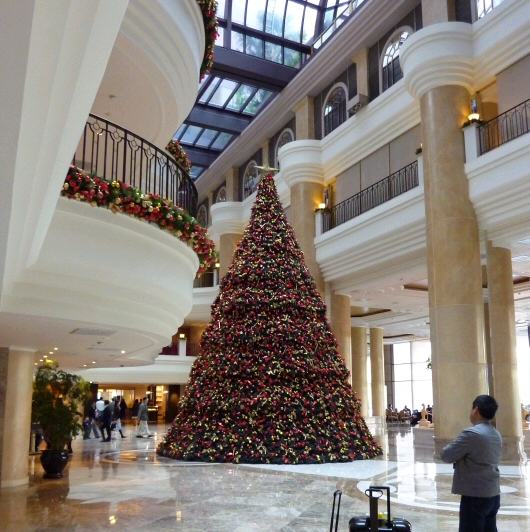 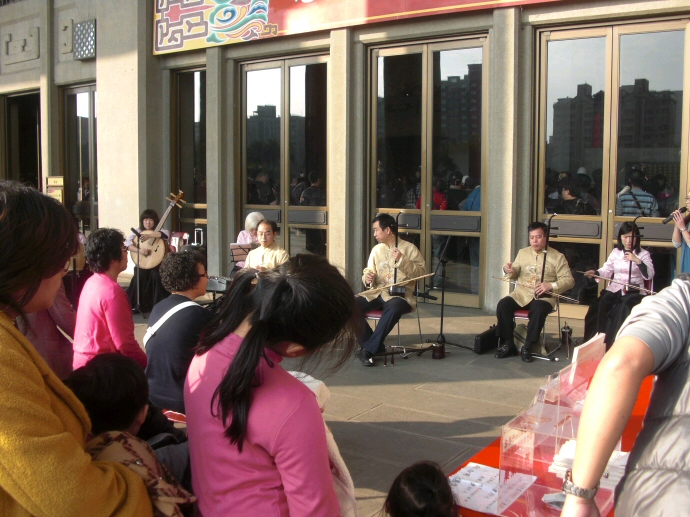 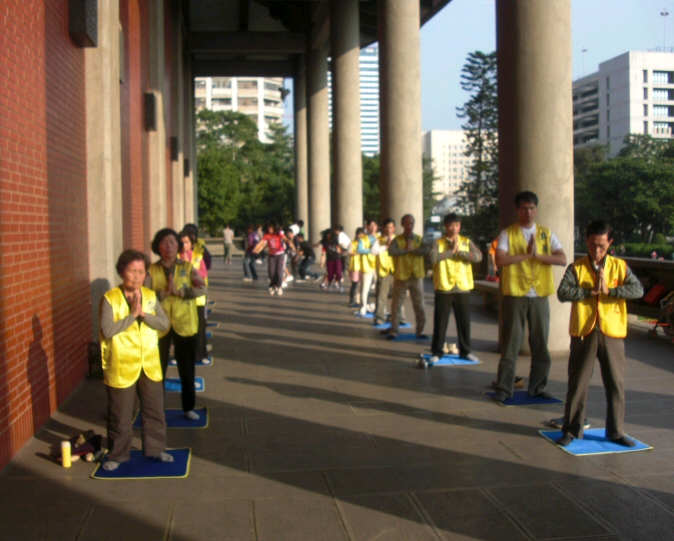