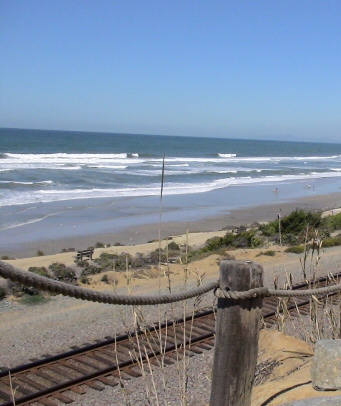 I was in San Diego recently. I spent three-quarters of a day in a place called Del Mar. It may be the nicest place in the world. God damned nice place. Ocean, trains, beach, fancy-dancy shops, surfers, and a really good NY-style Italian pizzeria that offered a Chicken Parm hero with a Really good sauce.

Having been to San Diego before, and witnessed its wide, white-sand beaches and flat terrain, I came away judging it third amongst California’s big three cities. Nice, yes; close to Mexico — that’s a treat; and there was La Jolla, a quaint coastal town with a rocky beach and pounding waves. But San Diego didn’t have San Francisco’s winding coastal roads; no Muir Woods; no Stinson Beach. It didn’t have LA’s diversity, from Venice Beach to the Pacific Palisades. It wasn’t until this my second stay in San Diego, with three-quarters of a day to kill waiting for a plane, that I took a venture a tad north and discovered Del Mar, one of its northern coastal towns.

Del Mar grabs you as you drive through it heading north on US 101. It doesn’t reach out and grab you — it grabs you like a beautiful woman does when she’s visiting your workplace and getting coffee from the kitchen, and you decide its high time you got a cup of coffee yourself from the kitchen. Del Mar is an active but quaint seaside village — you can see the ocean and its wide beach and towering aquamarine surf a block to the left as you drive through the center of town heading north. I was looking for a place to settle in and work, to put to best use the free time I had before a late afternoon flight back to NYC.

Primarily I was looking for a nook with AC power and a view of the California life. Del Mar looked like a perfect fit. I did a quick drive-thru, canvassing the town, and spied a community center on the beach that looked like it would get me the requisite AC outlet, view of the ocean, and public bathrooms. I was right. I parked and hunkered down with my coffee (purchased in La Jolla, a 15 minute drive from the south) and laptop. The beach on a Thursday work-day morning was scattered with moms and small kids; on the bluff overlooking the beach, retirees walked and sat on benches. 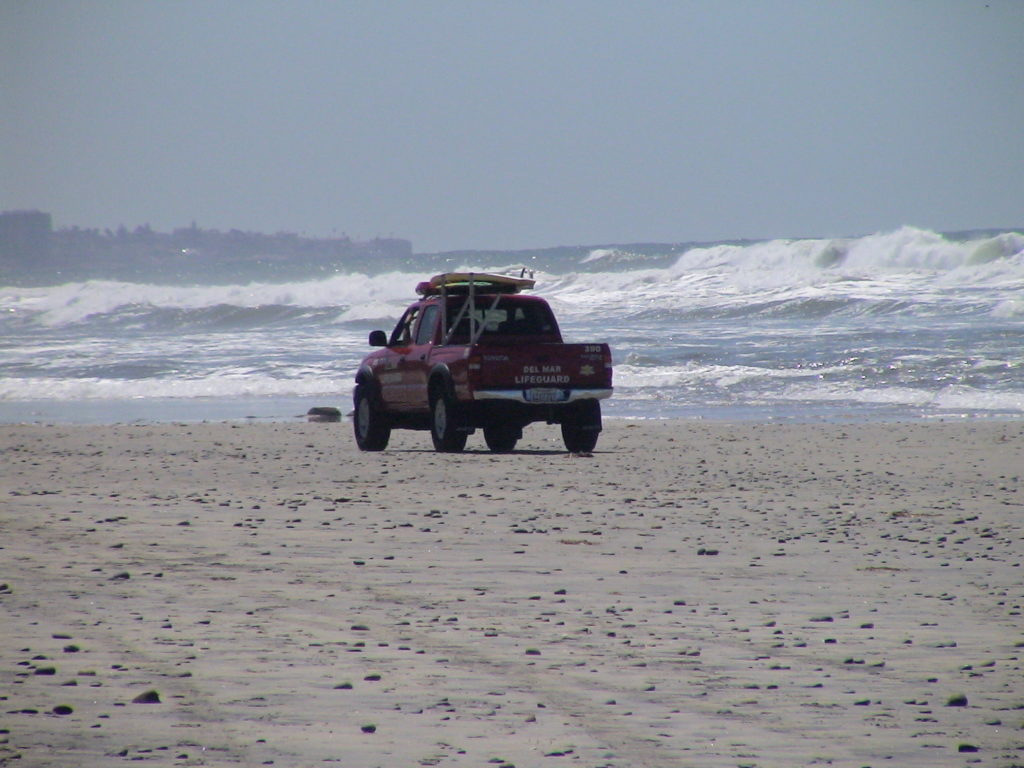 I happened to sit smack dab next to a morning meeting of the local Del Mar civic group, being held in the community center. Mostly retirees discussing the events that the town would put on for the coming Spring, summer, and Fall. A local opera singer would volunteer some performances in the summer before his normal touring schedule kicked off in the Fall, the leader of the group was happy to announce. After all the planning was done, the group broke up and many headed downstairs for card games and recreation.

A train runs through Del Mar, California, on about the closest train tracks to the ocean that you’ll ever see. Trains rip through town during frequent intervals — maybe 2 or 3 an hour. There’s commuter trains and long-distance passenger trains. A railroad crossing across the main road past the community center announces their arrival with the ringing of the alarm bell and lowering of the crossing arms.

A runner’s path follows alongside the train tracks, on a minor bluff overlooking the beach. And there’s a public park at the top of that bluff, with some benches and very plucky squirrels who almost demand a piece of your sandwich if you decide to have lunch up there. By one of the benches lies a plaque dedicated to a fellow who was a long-standing resident — remembered for declaring that Del Mar was the best place on earth; he must have spent many days sitting at the top of that bluff, the railroad tracks at his back, and grand ocean in front of him, the pounding surf, the stiff ocean breeze, with the squirrels and the smells of the California flowers and nature around him, and that big blue sunny sky overhead.

I ate my lunch on that bluff and didn’t give a thing to the pesky squirrels, who are fairly rude bastards actually. Chicken parm heros are made or broken by the taste of the sauce. There’s only a handful of places in my lifetime of eating chicken parm heros that have had such a sweet and tasty sauce that I’d travel miles out of my way to return to get one. One place was in Little Neck, Queens, NY; went out of business 12 years ago. Del Mar Pizza, just off the main drag of Del Mar California, ranks as one of those places. An umm-umm good, sweet-tasting tomato sauce. So good that I stopped back in the eatery after eating it to tell the pretty young woman behind the counter that it was a Great sauce. She was surprised and flattered. The eatery featured numerous pictures of NY and the World Trade Center, as if it had been plucked right out of Staten Island and flown to Del Mar. I wondered if the young hostess had ever been to NY; perhaps she was the owner’s daughter and had just migrated from Brooklyn to sunny Del Mar. Either way, they make a great sauce. 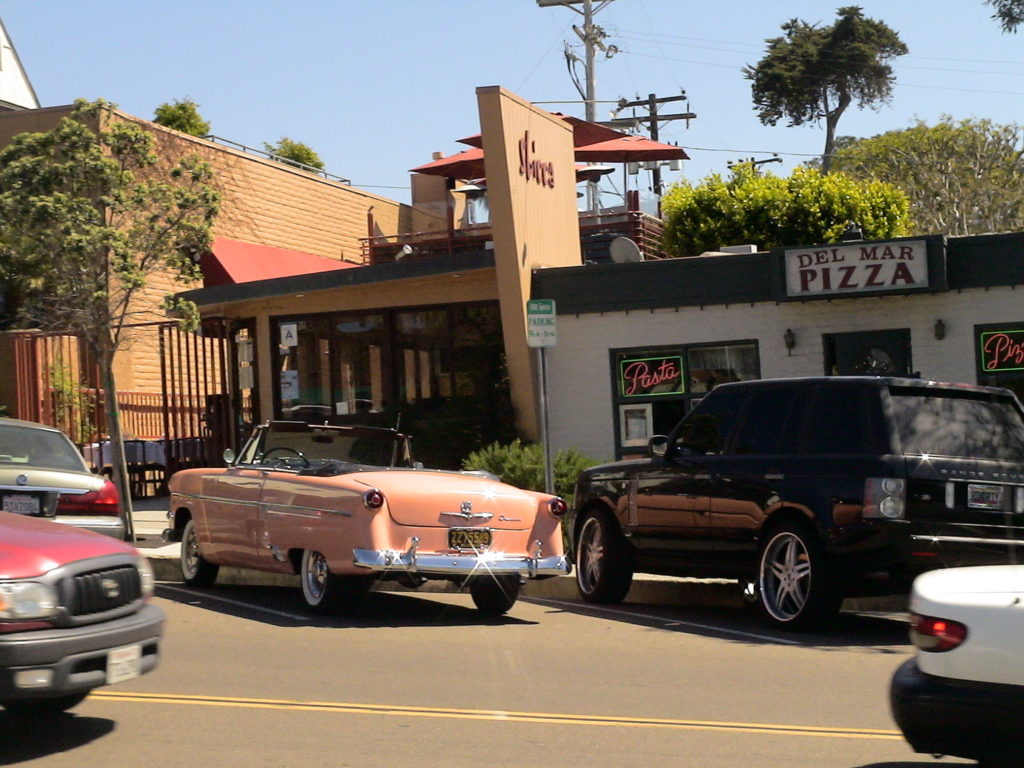 If you’re thinking of moving to Del Mar, you’d not be the first. The prices of homes are quite stiff. No doubt that the old folks in the civic group are all multi-millionaires. As the day wound down, I got back in the rental car and toured through some of the hills behind the town. There, lie many nice homes tucked into the rural, forested hills with the rich array of flowers of so many types, letting off that sweet California smell. A real paradise, is Del Mar, California. 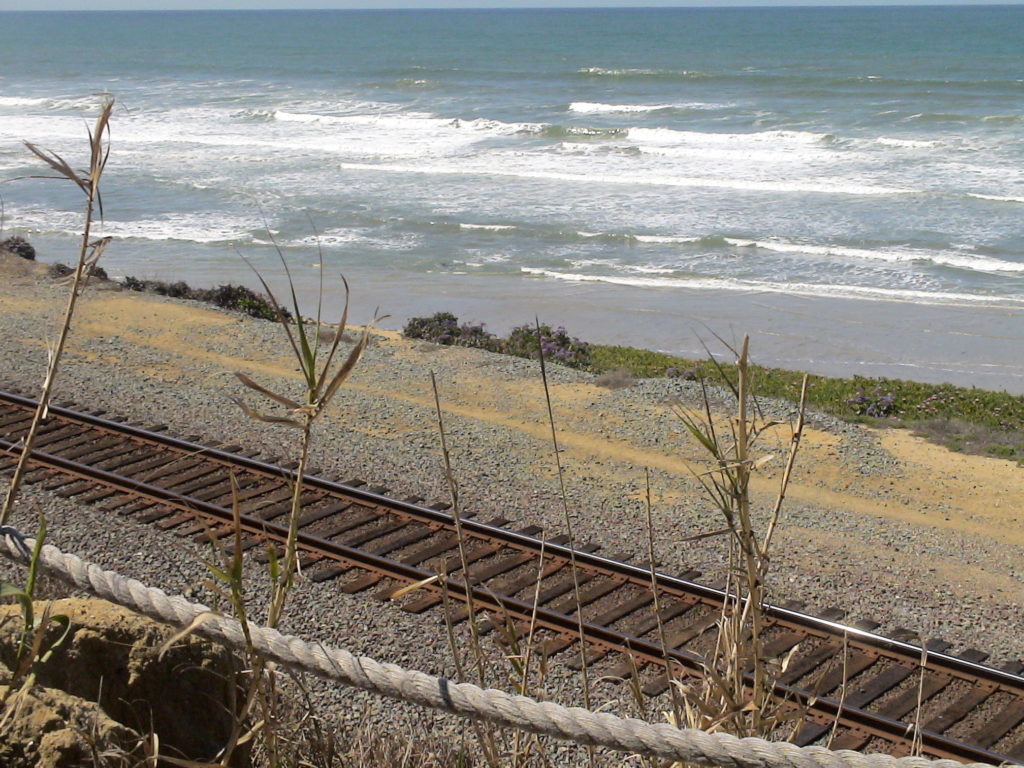 On return to the community center, I examined some of the old photographs they have hung up — big large black and white photographs of Del Mar in the 1920’s. The railroad was there, on the bluff overlooking the beach just like today. And the main road, US 101, ran parallel to the beach and inset just like it does today. But there was only one building, and one or two old model T Ford’s parked by the power station next to what is now the community center. Man the folks who discovered Del Mar only 80 years ago must have thought they found heaven on earth. Forget gold; the great land rush was begun then, before our time. I mentioned this to the Mexican janitor who came by to pleasantly ask me if I needed anything and he agreed. At least he gets to work there. I eventually pulled myself away from the town for my journey back to NYC and Newark Airport. 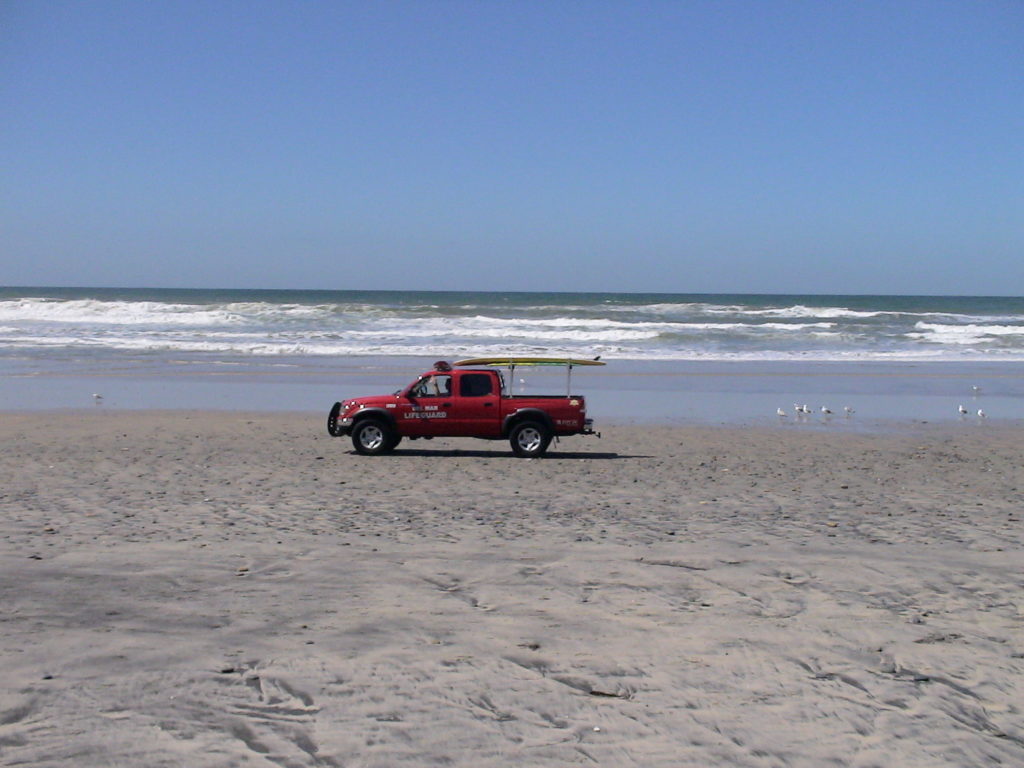