One of the most spectacular drives you can ever take, and quaintest place to visit — is the drive on old Highway 1 on the other side of the Golden Gate Bridge, through the Muir Woods to Stinson Beach in California. An hour’s drive outside of San Francisco. 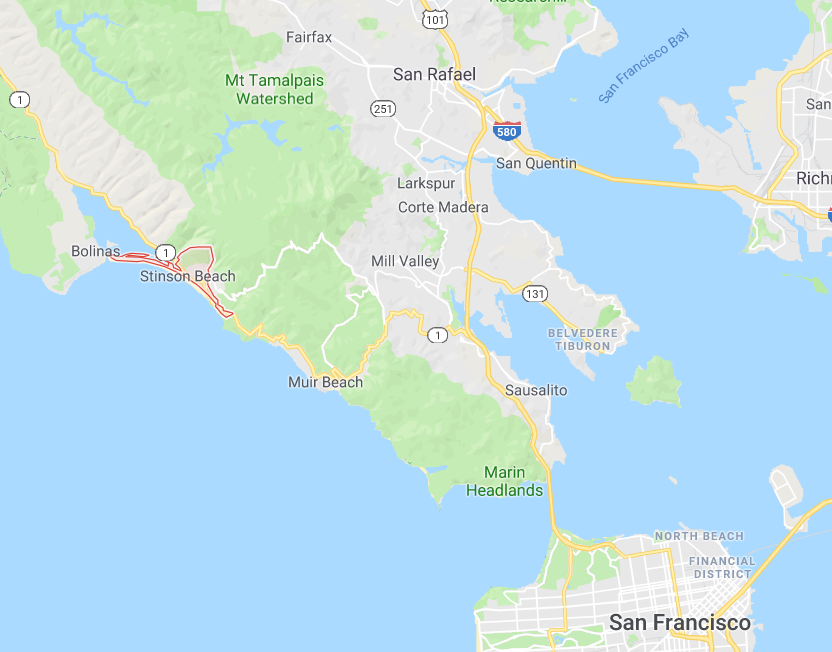 This is THE trip to proverbially ‘enjoy the journey’. Jump in your rental car and cross the Golden Gate Bridge out of San Francisco, then turn onto Highway 1. You will be on the ultimate twisty, turny highway — snaking thru the Muir Woods and then alongside the majestic Pacific Ocean, up and down and over and around hills; steep embankments; the massive ocean to your left. Twisty turny you go for miles and miles — until finally you come over a hill and there in front of you is Stinson Beach. Hidden paradise. 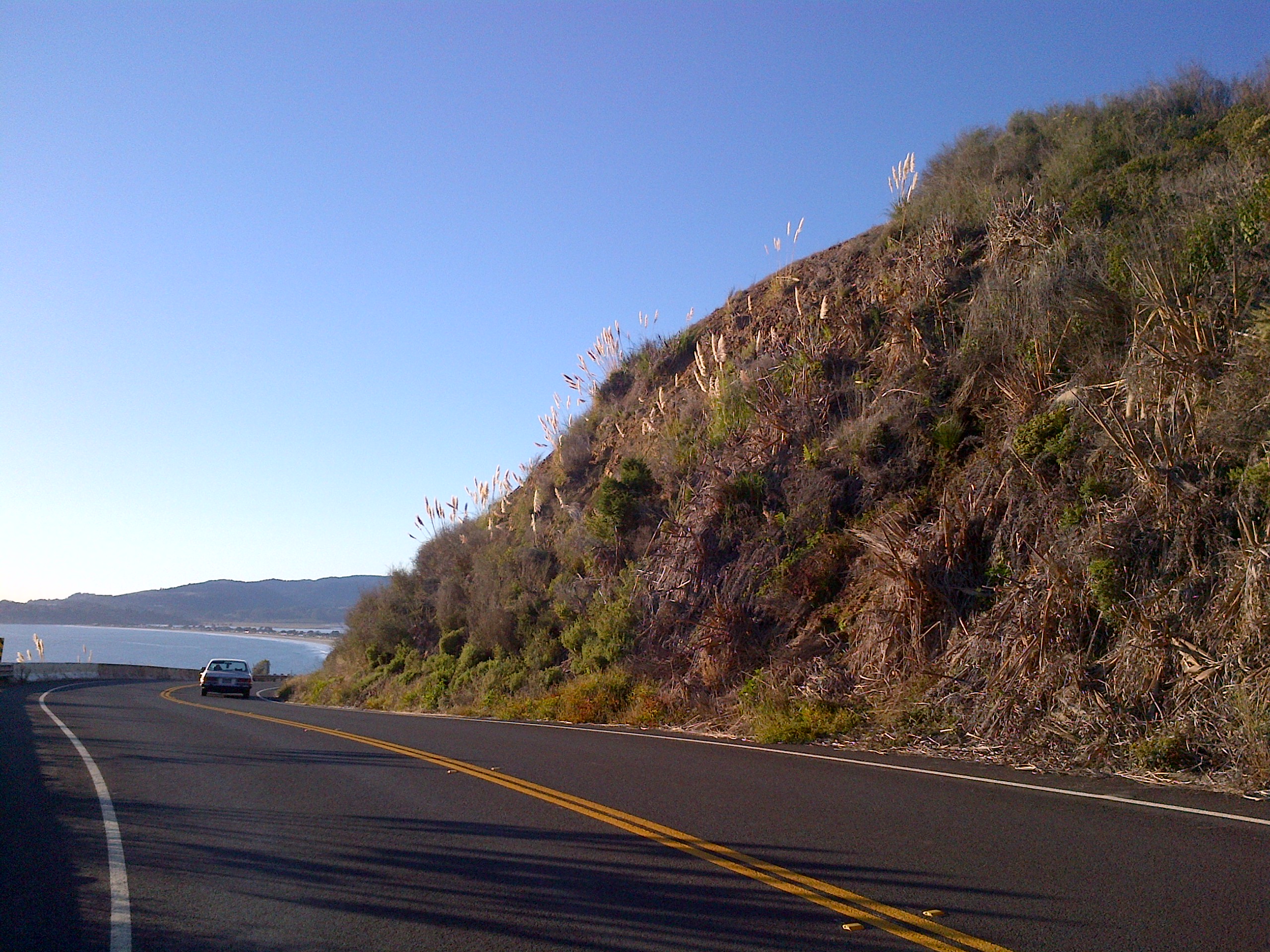 You can park anywhere in town, and there is always ample parking — the 8 or 9 times I’ve been there. It is a very small town, with a couple of restaurants, a Library, a Post Office, a public basketball court, a couple of art galleries and souvenir shops; that’s about it. There are some nearby motels which are hard to reserve — see later in this article. 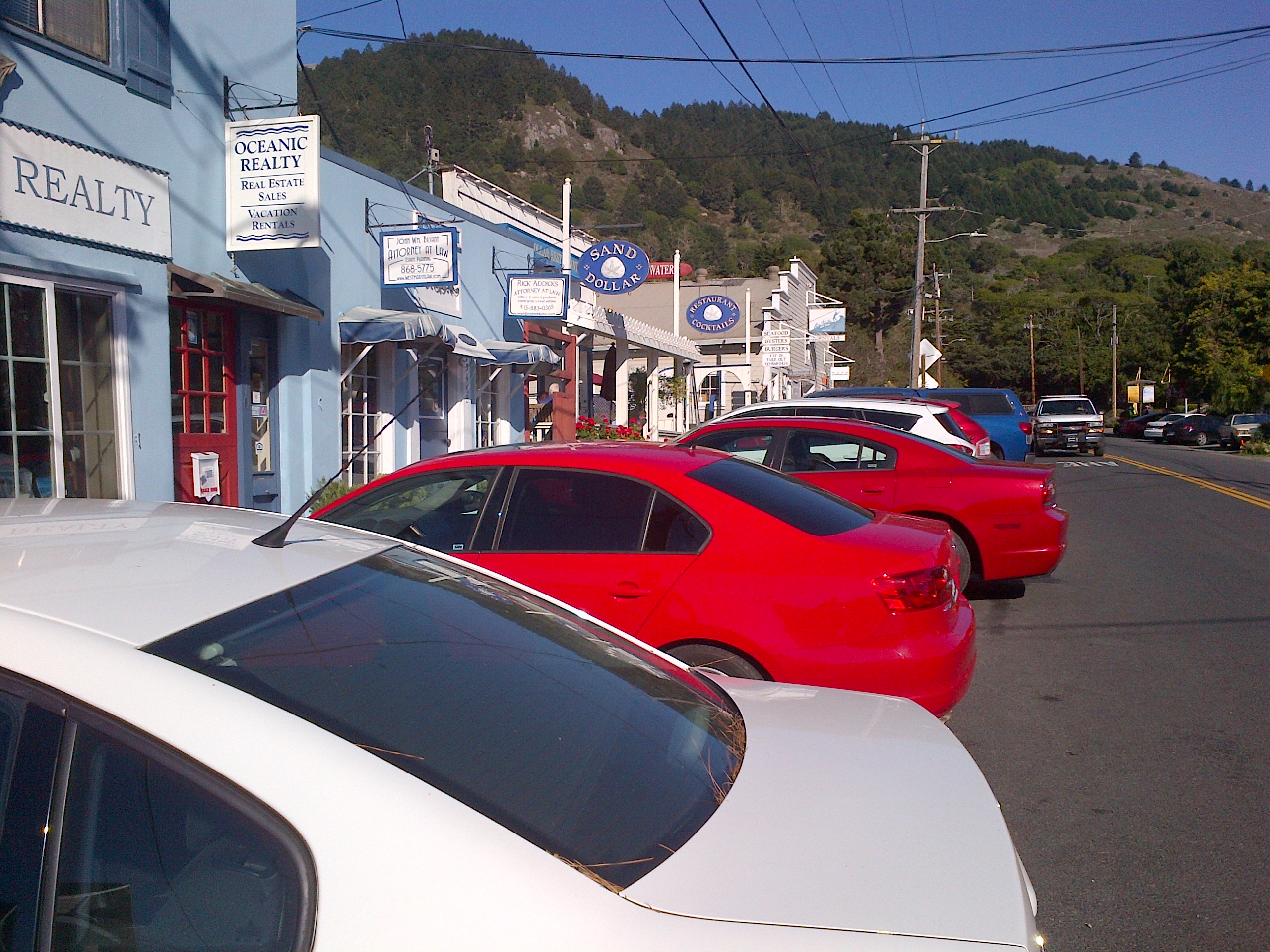 Note: the picture above was taken the last time I was in Stinson Beach a few years ago. In June 2020, there was a fire on this street after a propane tank exploded; two buildings were destroyed and two were severely damaged. It was reported that two people also suffered minor injuries.

A Note on the Parking:

A quick search on the internet shows that parking isn’t always readily available — although I never experienced it the 8 or 9 times I’ve been here, there are summer days when the parking lot gets full and there is no overflow parking, so you will be out of luck. This happens to such a degree that a public bus is available to get you to the beach — the Marin Transit Bus #61 (also known as the Marin Stagecoach).

“Stinson’s white sand and oceanfront make it one of the best swimming beaches in the Golden Gate National Recreation Area (GGNRA) and northern California”, says the GGNRA website.

The first time I was ever at Stinson Beach, a work-friend and native of San Francisco brought us there, in August. I was confounded that there were people sitting on the beach, all around — in leather jackets. The native I was with said that August in the San Francisco area is colder than the rest of the year due to the fog that comes in. It was probably in the 50’s that day. 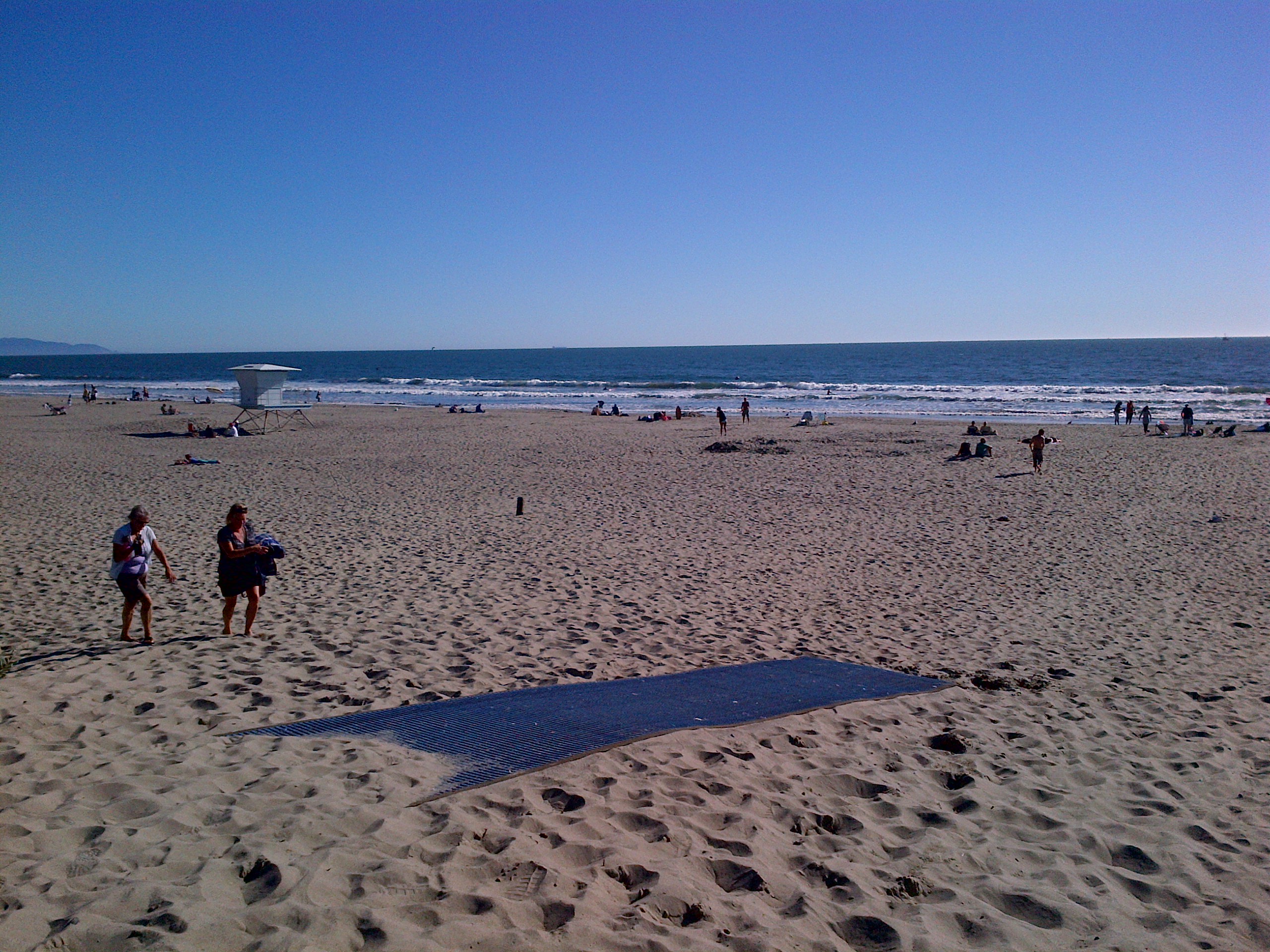 But that native advice contradicts the official average temperatures of Stinson Beach, which show the warmest temperatures in the summer, but do not account for fog. 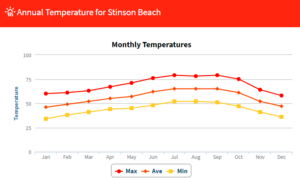 I have to say I’ve been to Stinson Beach in July and August and experienced beautiful, warm sunny days without fog. However, the current wikipedia entry confirms what my work friend said, “Like much of the California coast, summer afternoons are often cool and windy (and usually foggy) as winds blow in off the cold ocean.”

This is further confirmed by surfline.com, which states, “Summer, as with the rest of Northern California, sucks for surfing. Too foggy, too junky, too small and too damn packed with pasty tourists. The water’s colder, too, thanks to the upwelling that follows the merciless springtime winds.”

So if you’re in San Fran in the summer — watch the local fog forecast before deciding which day you’ll journey out.

Best Time of Year for Surfing = Winter & Fall (not Spring?)

The GGNRA website points out that the “best times of year for surfing are winter and spring. For windsurfers, the prevailing northwesterly winds blow best in the afternoon.” Surfline.com agrees with winter — saying the winter features “Heavy-duty weather and waves, frequently reaching 25 feet and bigger, accompanied with 50-knot south winds and horizontal rain. If you want to see some crazy conditions, go ahead and visit this area in the winter.”

But surfline.com disagrees on Spring (“Endless spells of stiff, cold north wind and big, junky surf. Frigid water from upwelling”) and says the Fall is “the best time for scoring clean surf and sunny skies. Early on in the season, chances are that the small surf of summer will be lingering. Fall can also see some gnarly winter-like storms, with 20-foot waves and heavy rainfall. The prevailing winds are usually the lightest this time of year, so if you’re going to visit lower Northern California at all, come during the months of September through November.”

Whatever time of year you are in San Fran, you can check out the Surf forecast at surfline.com.

An internet search finds that the best time to see Sea Lions on the beach is in the Spring.

Best Time of Year for Wading and Swimming = Summer

The beach itself is gorgeous — wide and long with nice sized waves. It is noted for its white sand, sandy bottom, and relatively shallow depths, making it a great beach for wading or swimming. 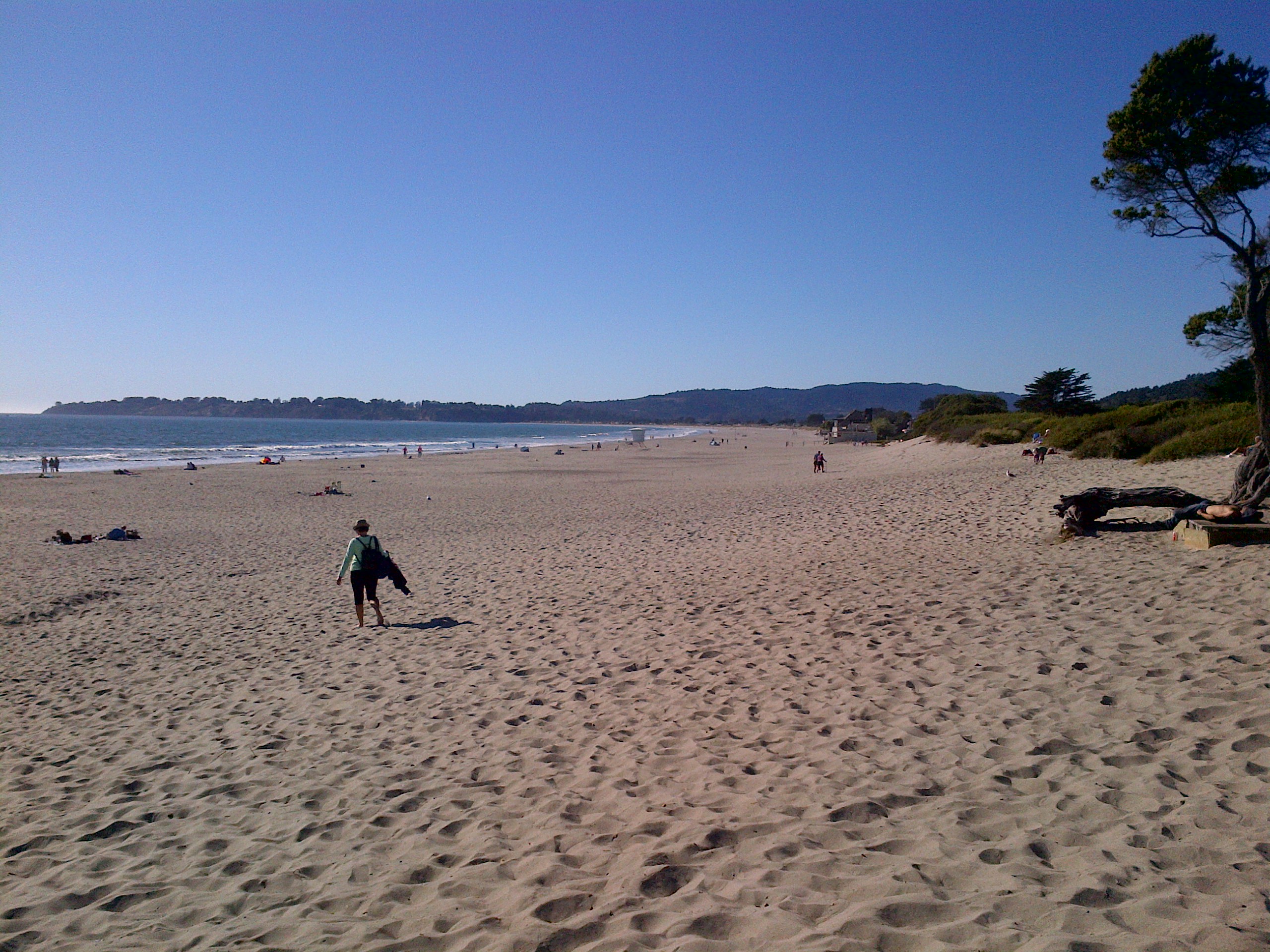 Beach rules: no fires, no pets, and watch out for rip currents and sharks if you go out too far. Lifeguards are on duty from the first week of July to Labor Day. 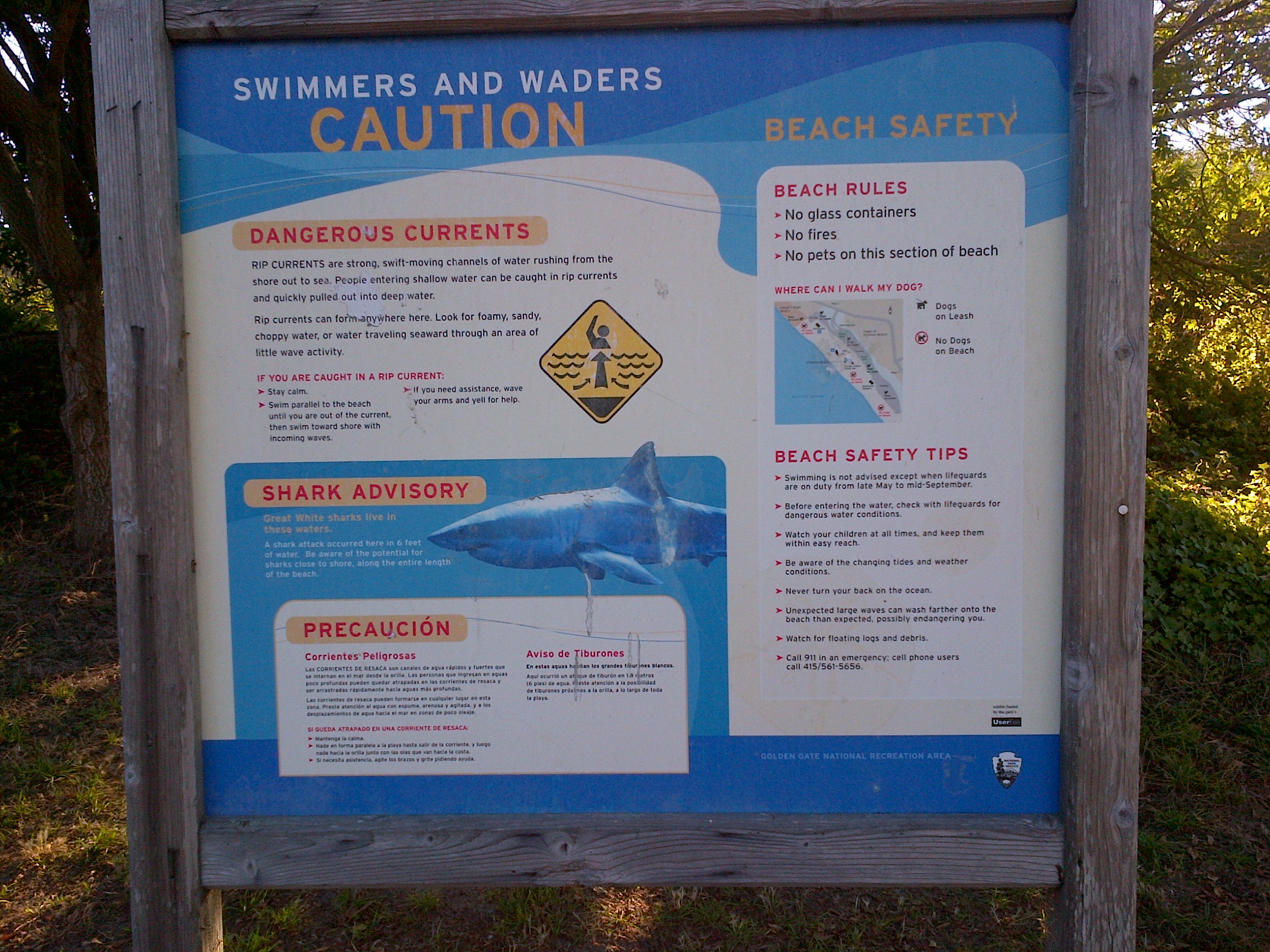 Every time I’ve been to Stinson Beach has been on the backend of a work trip to the San Francisco Bay area. So my time there is catch-as-catch-can; sometimes getting there with only a few hours of daylight left. I always try to catch dinner in one of the seaside restaurants — for example the Parkside Cafe. 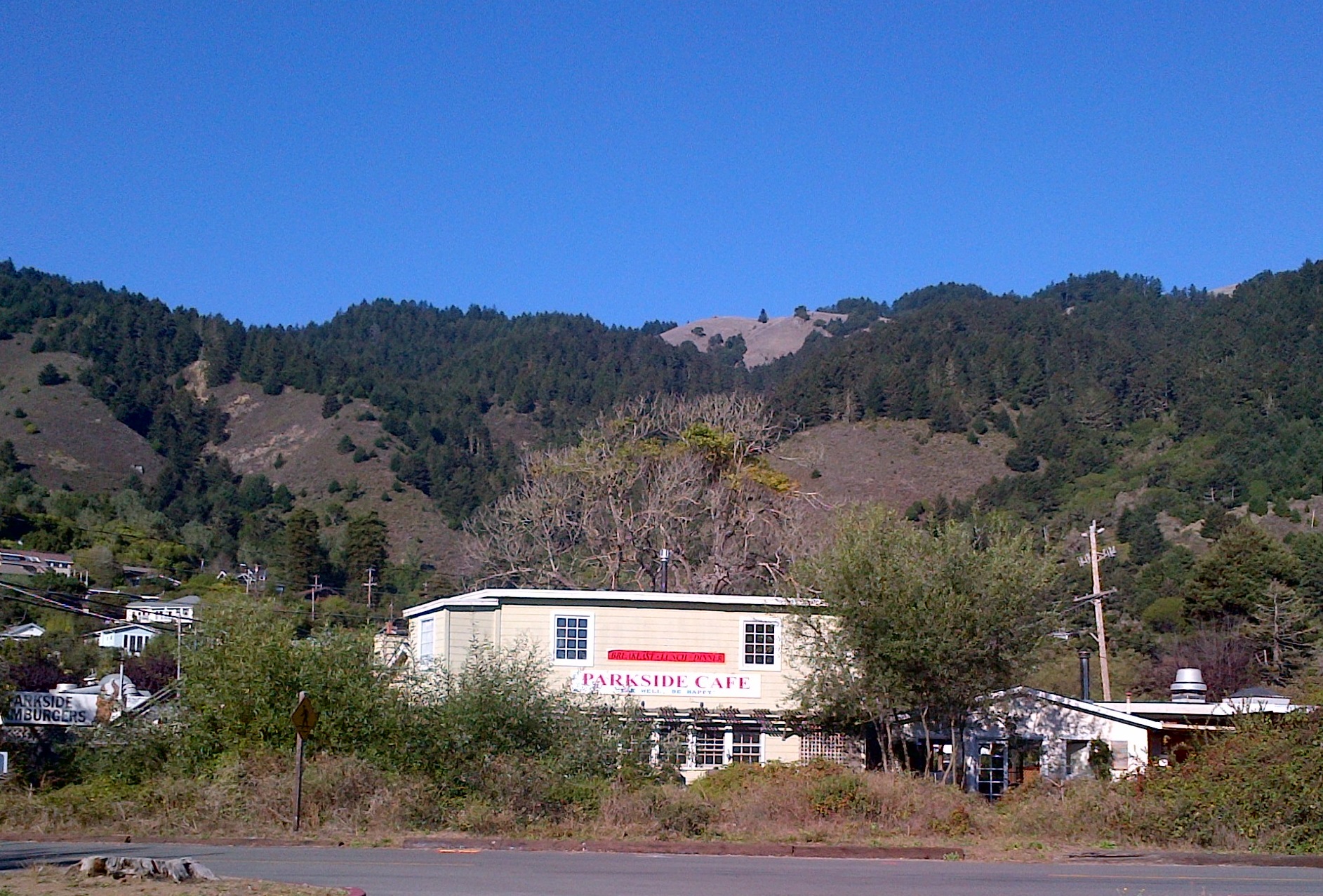 Parkside Cafe has an ocean view and relaxed atmosphere. And excellent food. 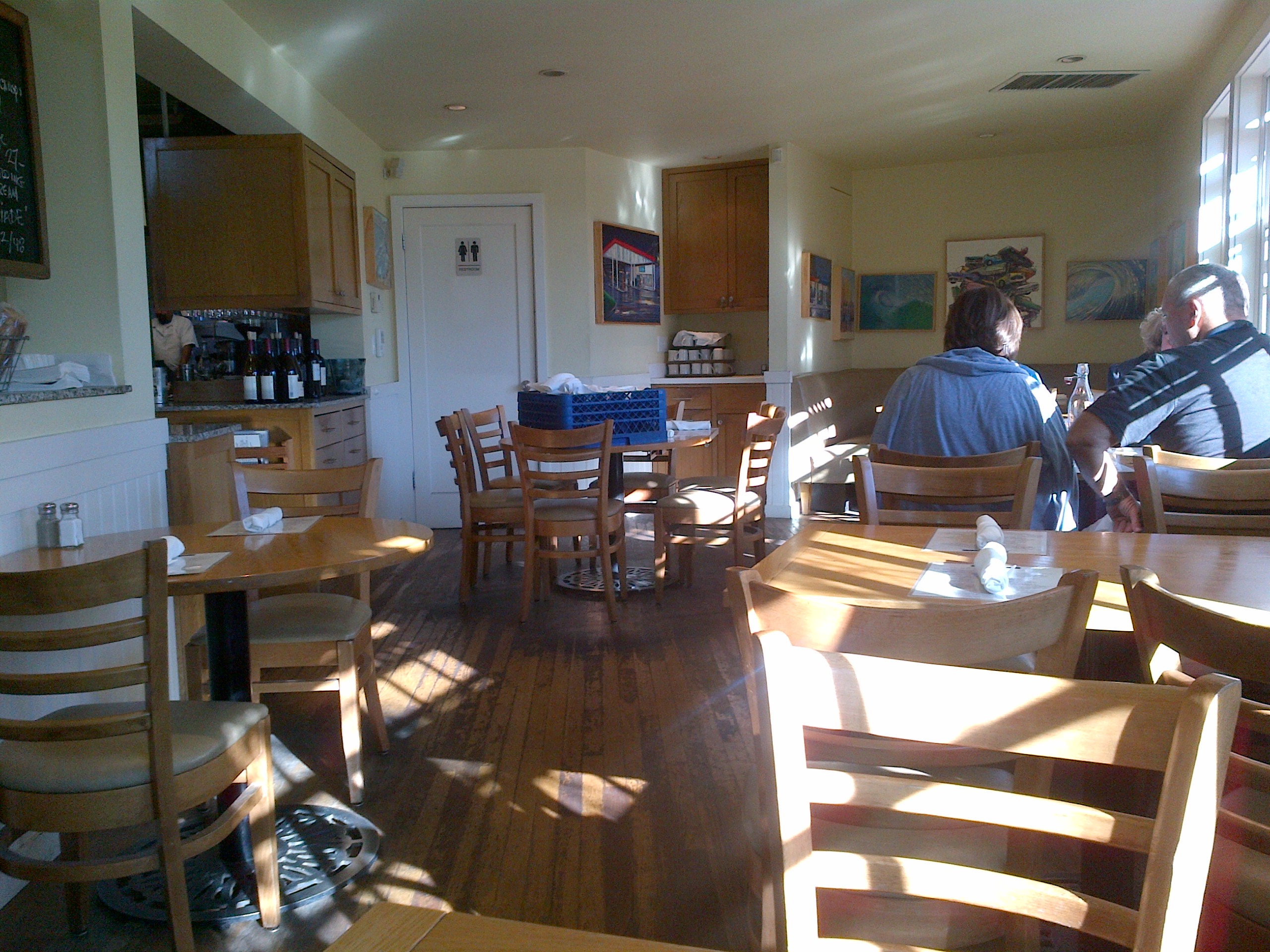 And if you are at Stinson Beach what better to eat than seafood — starting with an appetizer of Oysters on the Half Shell. 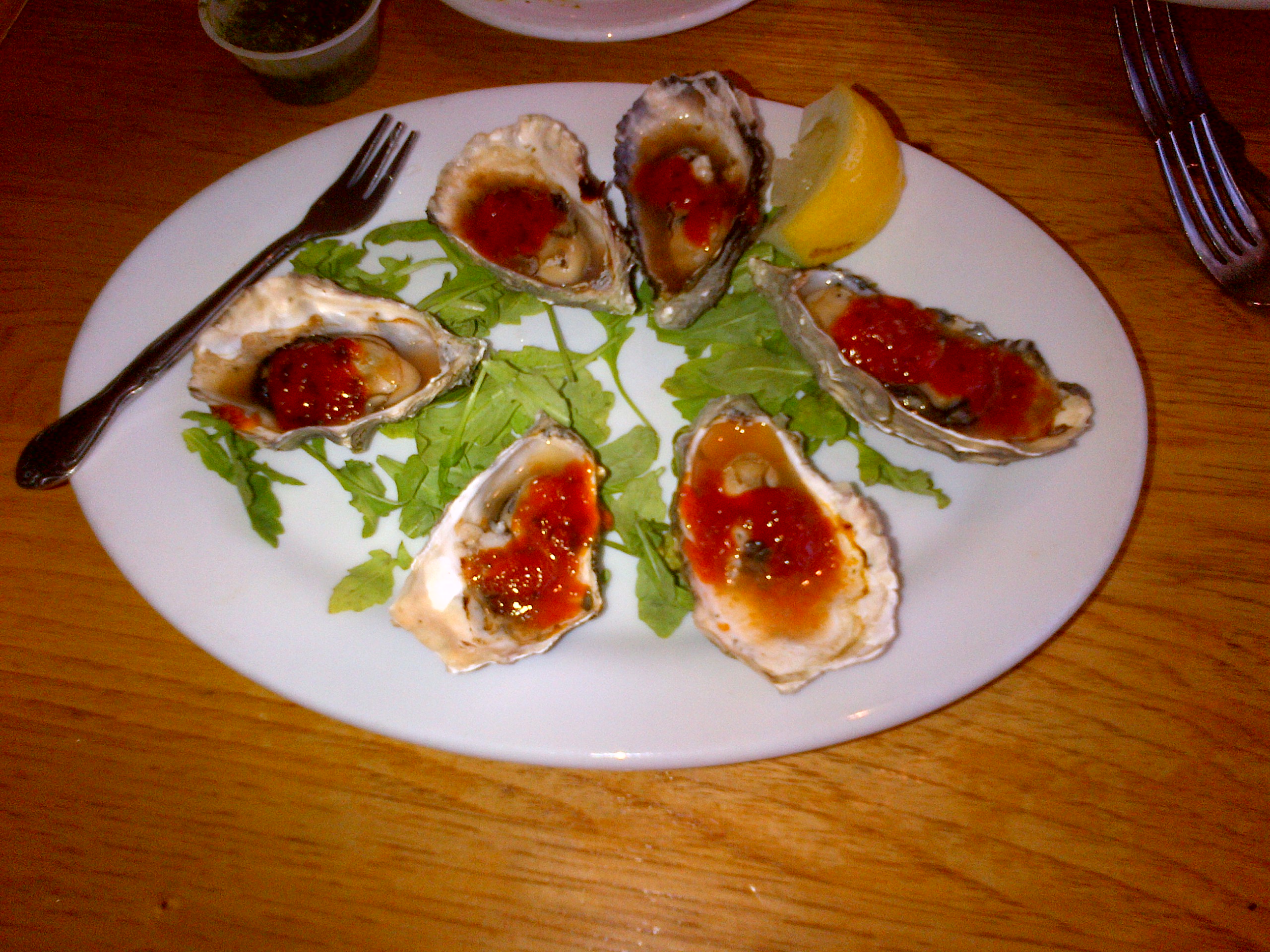 Also noted is the bread and oil they give you to begin the meal. Exceptional. 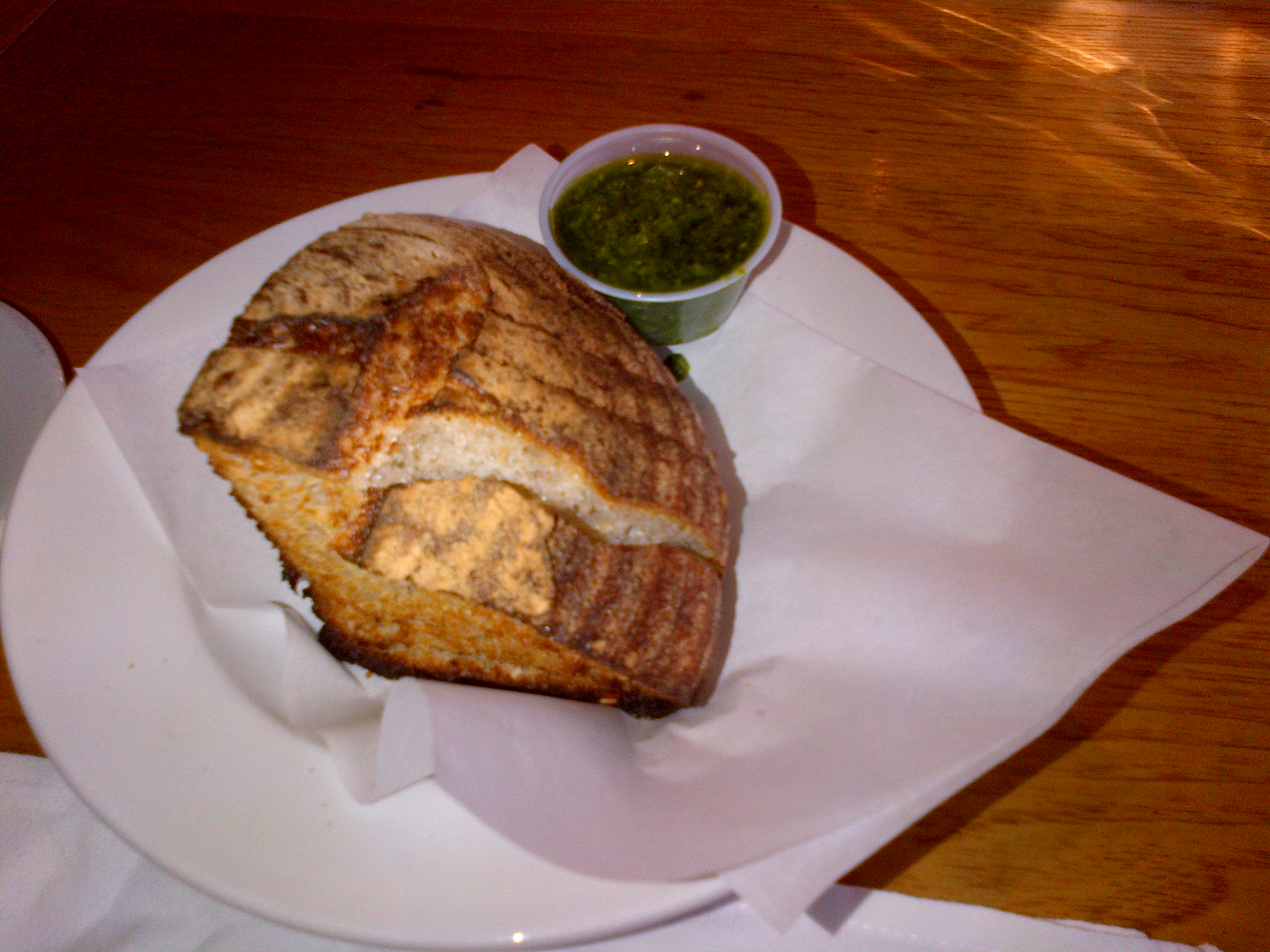 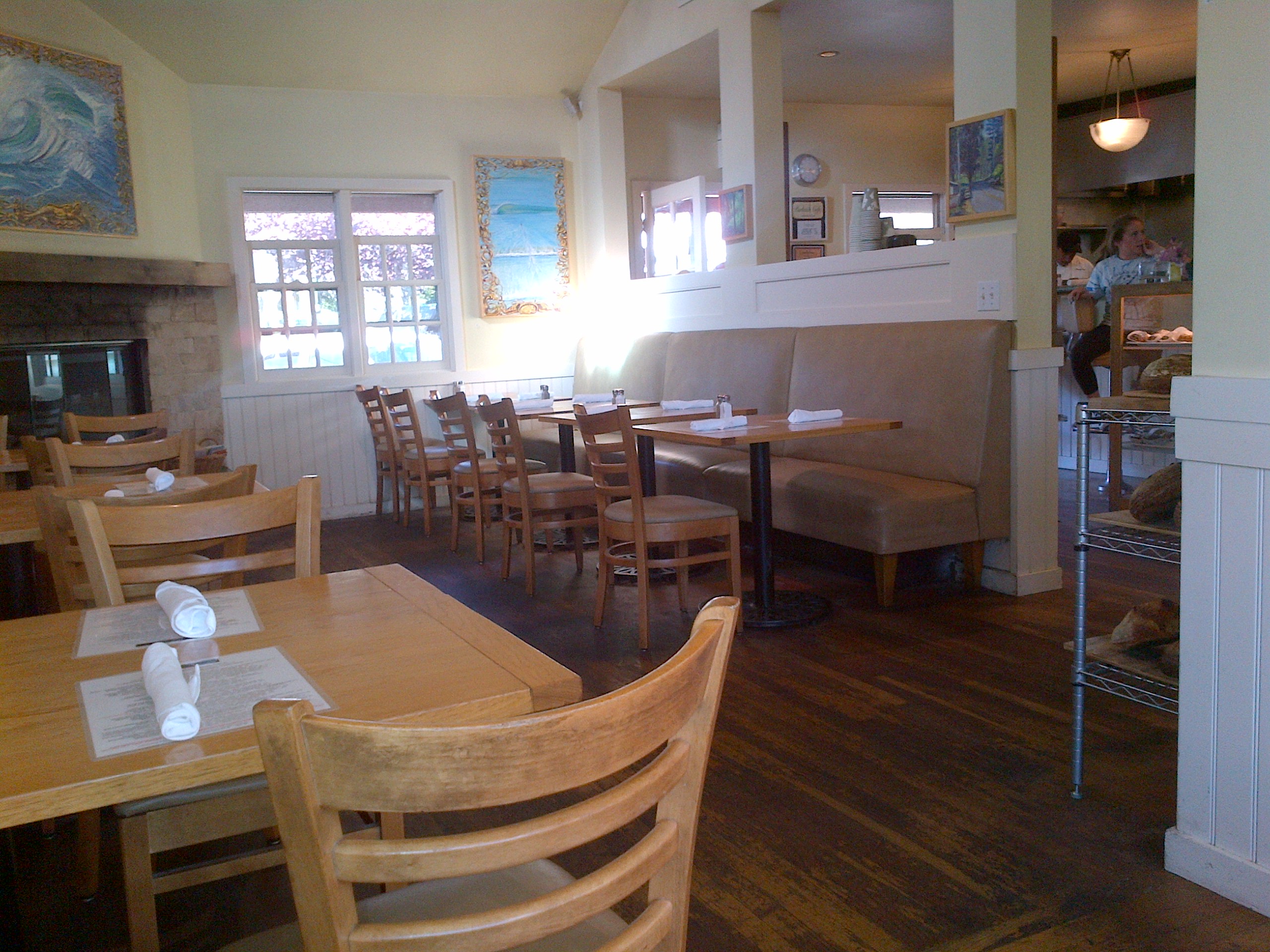 As I mentioned, there’s a public basketball court — full court. I’ve never played on it since I never had a basketball with me. 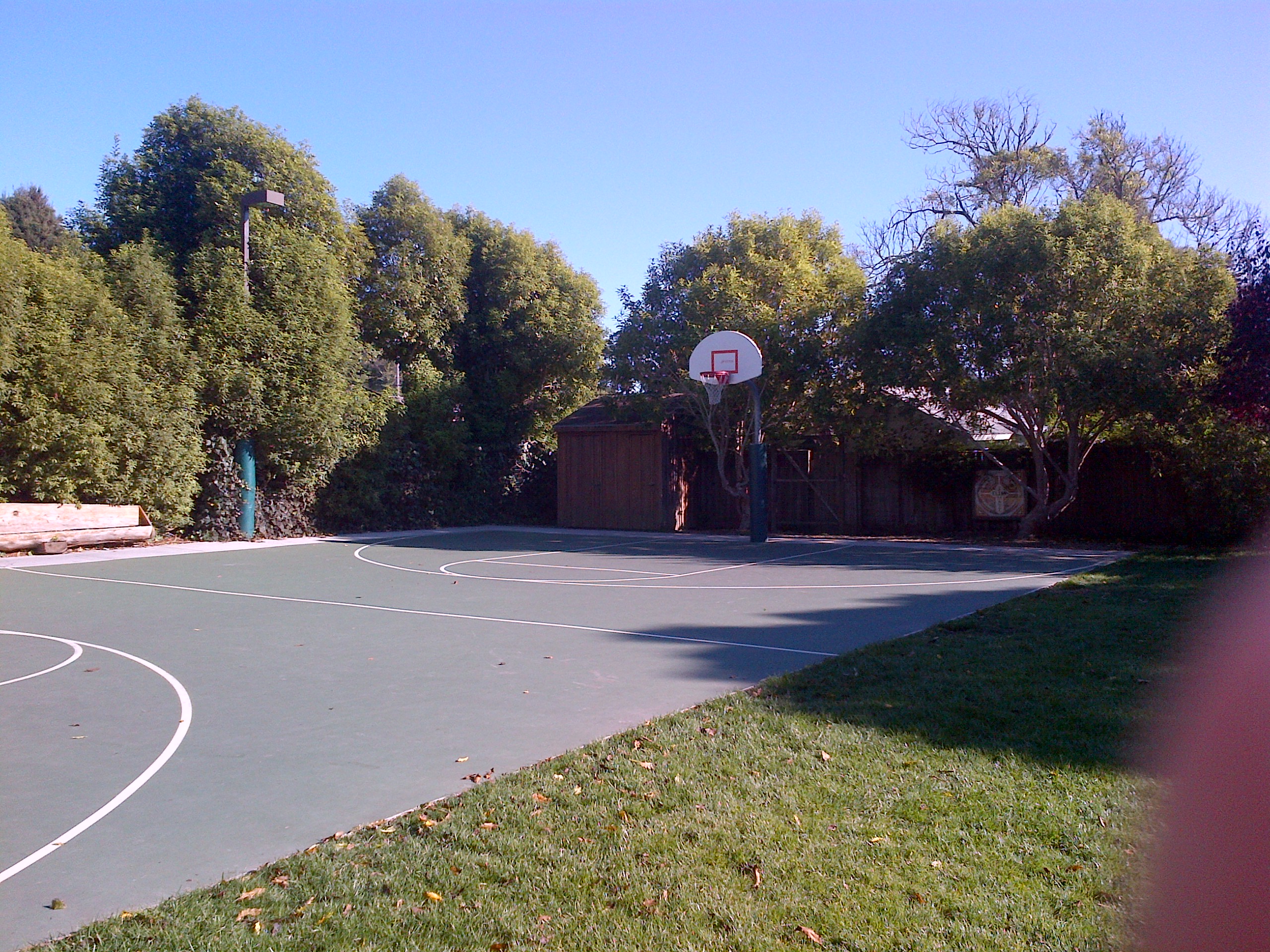 According to the National Parks Conservatory website, you can “borrow volleyball nets and balls from the main lifeguard tower in exchange for a driver’s license.” Maybe you can get a basketball from them too; I’ve never tried.

Also, as mentioned, there are a couple of art galleries which also sell souvenirs — I’ve been to Stinson Beach with 3 open, and then on later trips only one or two in business and open for business. 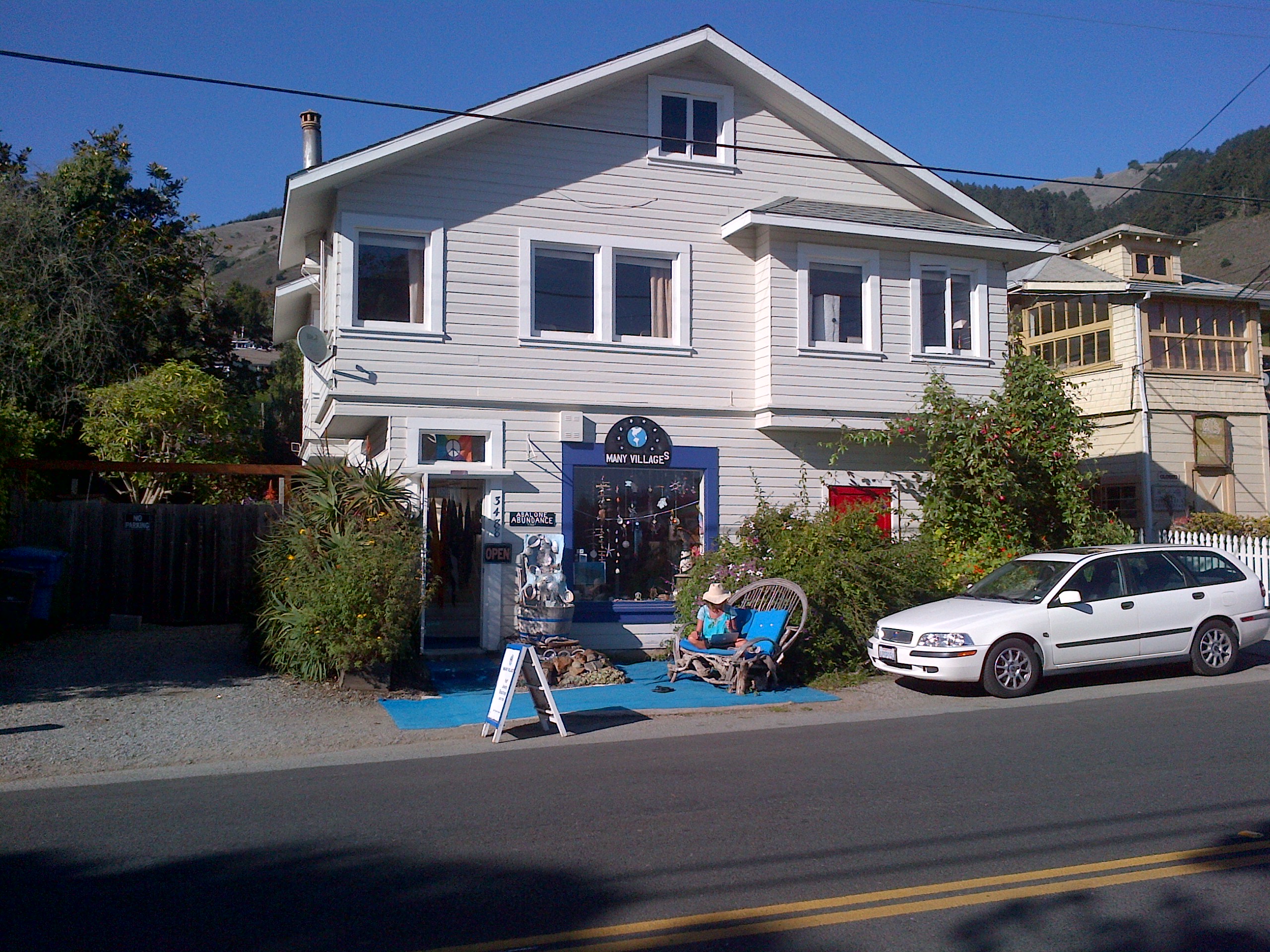 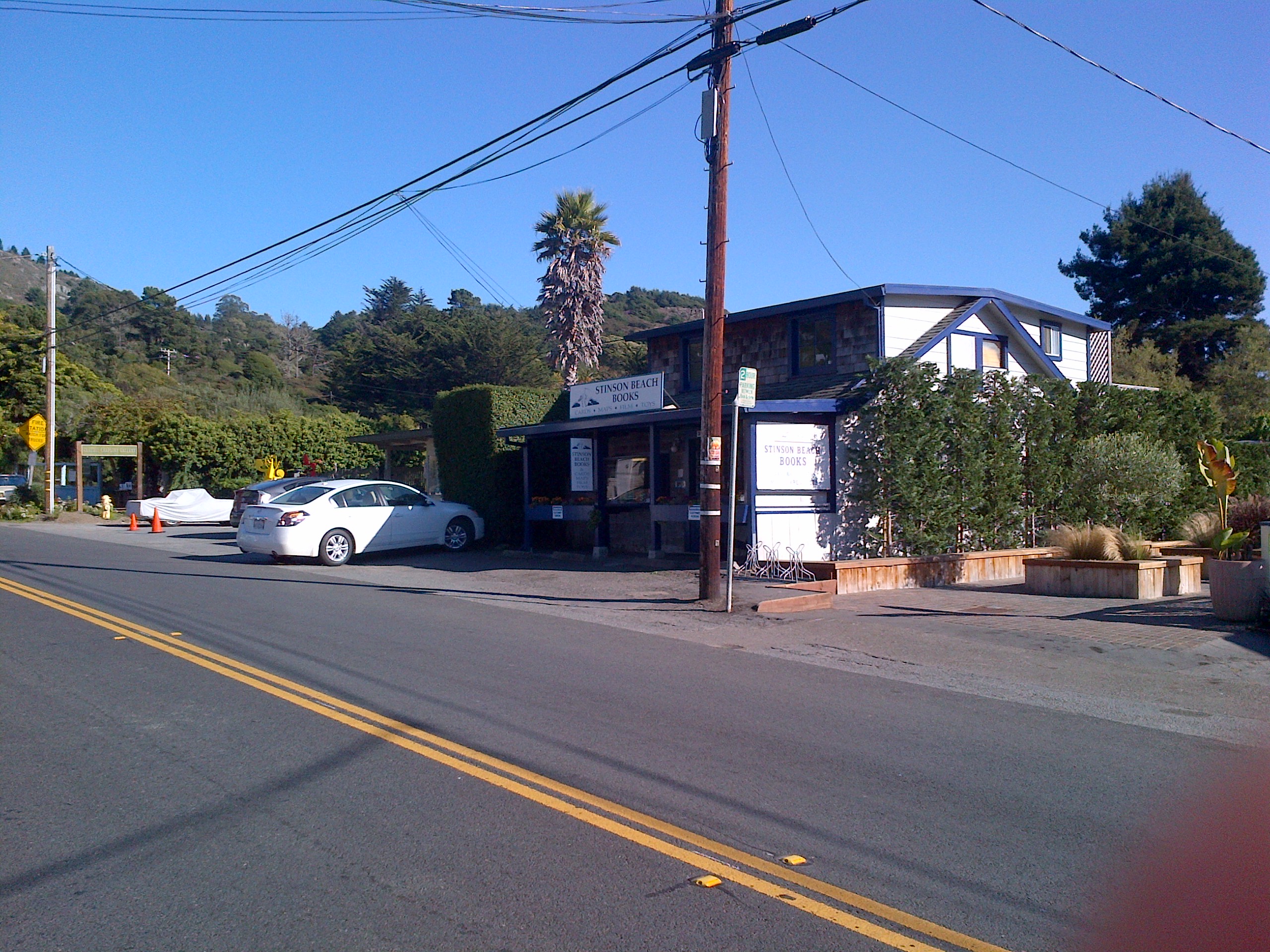 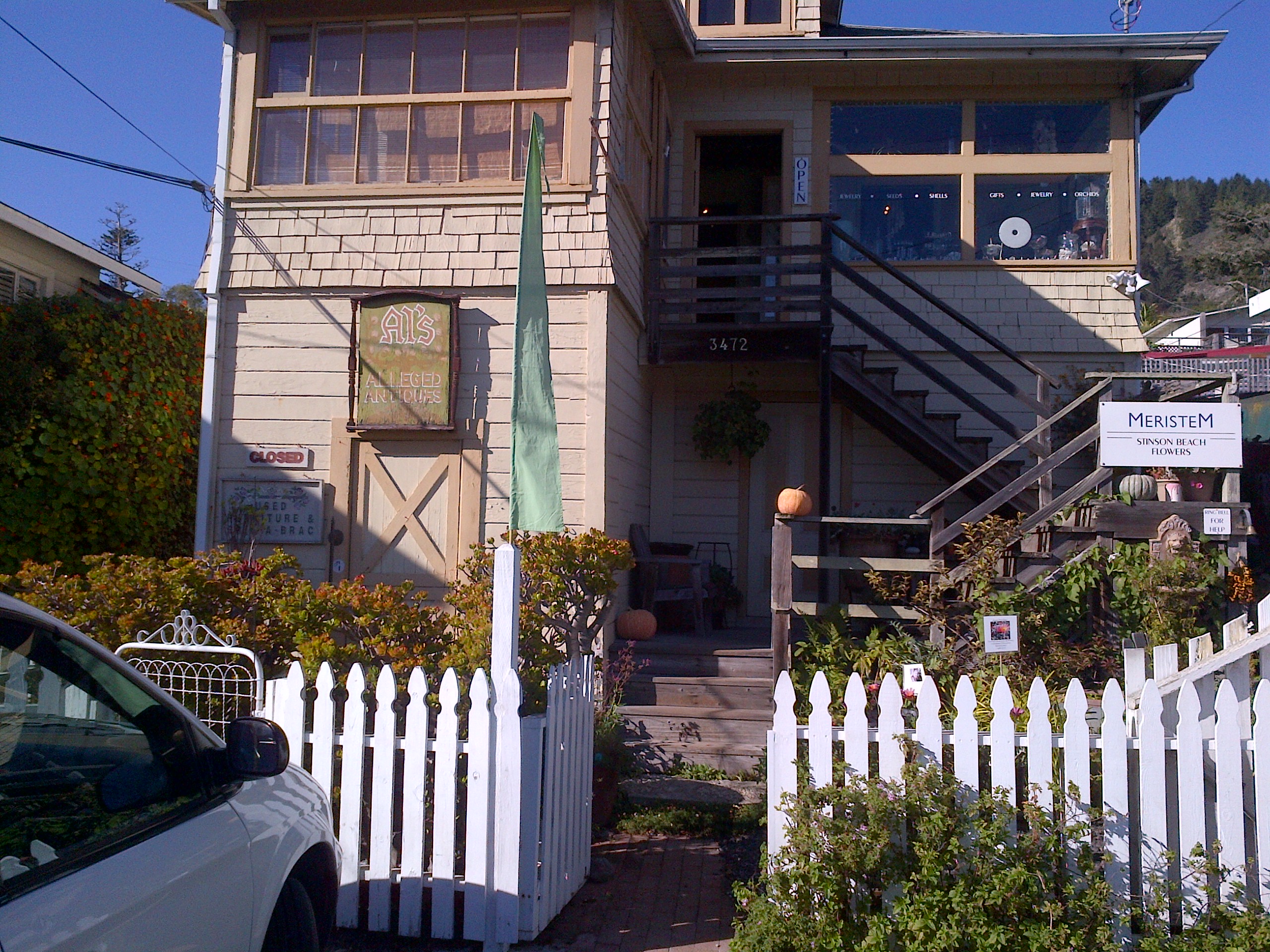 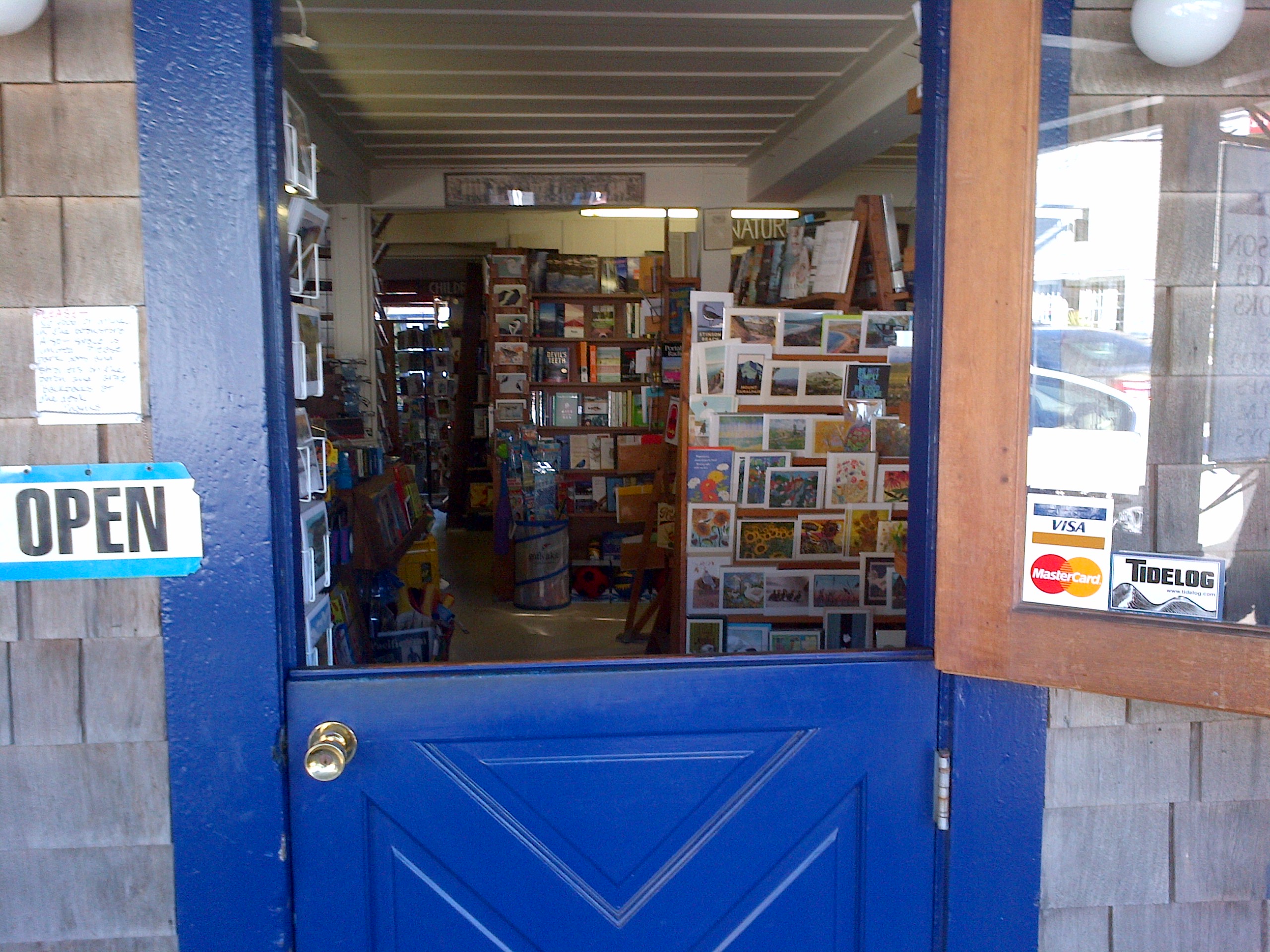 On October 13, 1970, Janis Joplin’s ashes were scattered by plane into the Pacific Ocean at Stinson Beach. So she had clearly discovered the place and must have liked it a lot. The wikipedia entry also lists Jerry Garcia and Steve Miller as having been famous residents of the area. You wonder what the Stinson Beach scene was like in the late 60’s — probably similar to today.

7. Enjoy the Journey — Back to San Fran

At some point you will need to make the difficult decision to leave Stinson Beach and head back to San Francisco. The one thing that helps you pull yourself away is the fact that the return drive will be fun — thru the twisty, turny Highway 1 — and also the knowledge that when it gets dark the drive will be more difficult. 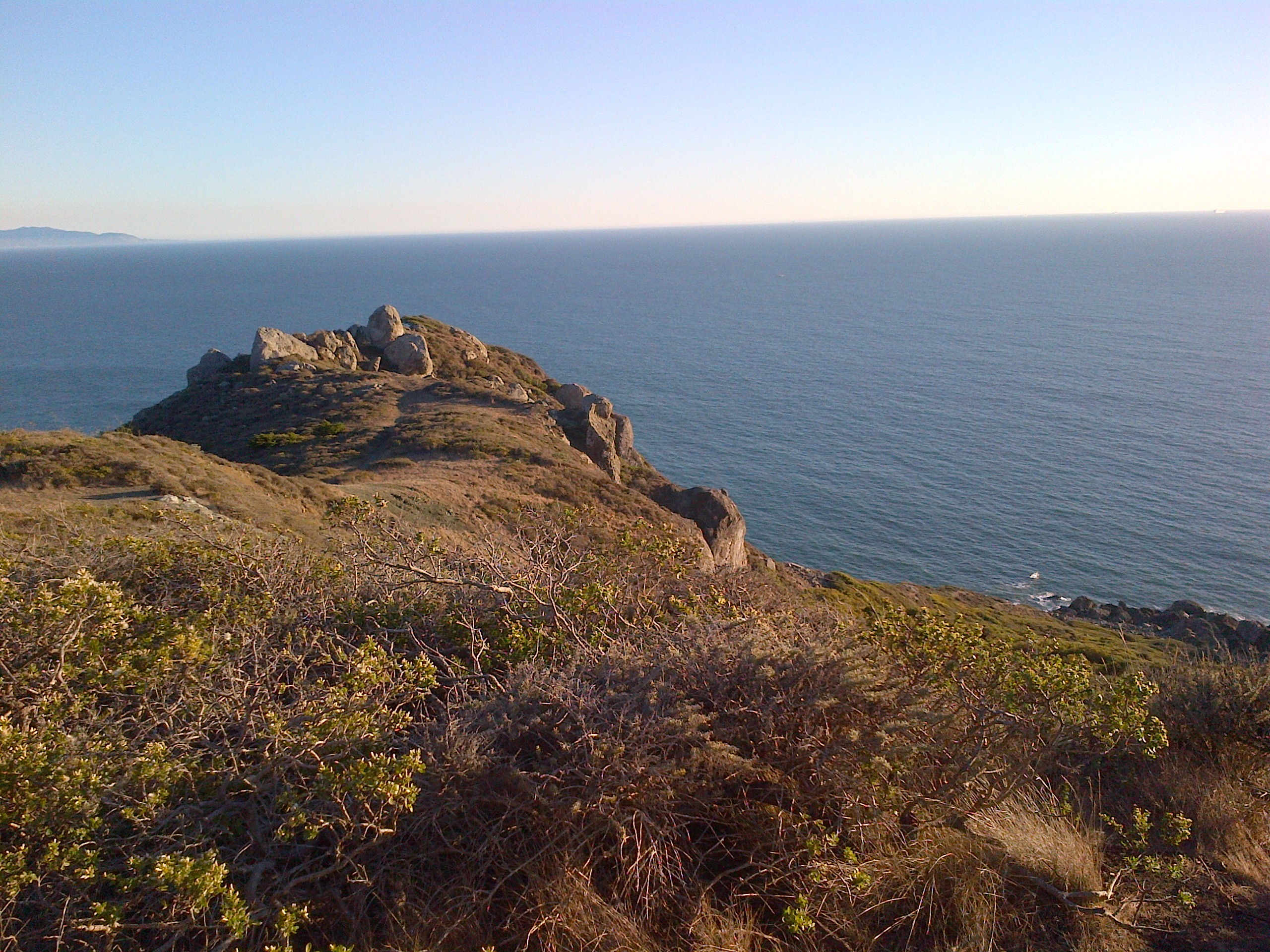 If you drive back early enough, you can make frequent stops alongside the Highway to take in and take pictures of, the scenery. And walk up onto the cliffs if you want to (but be careful). 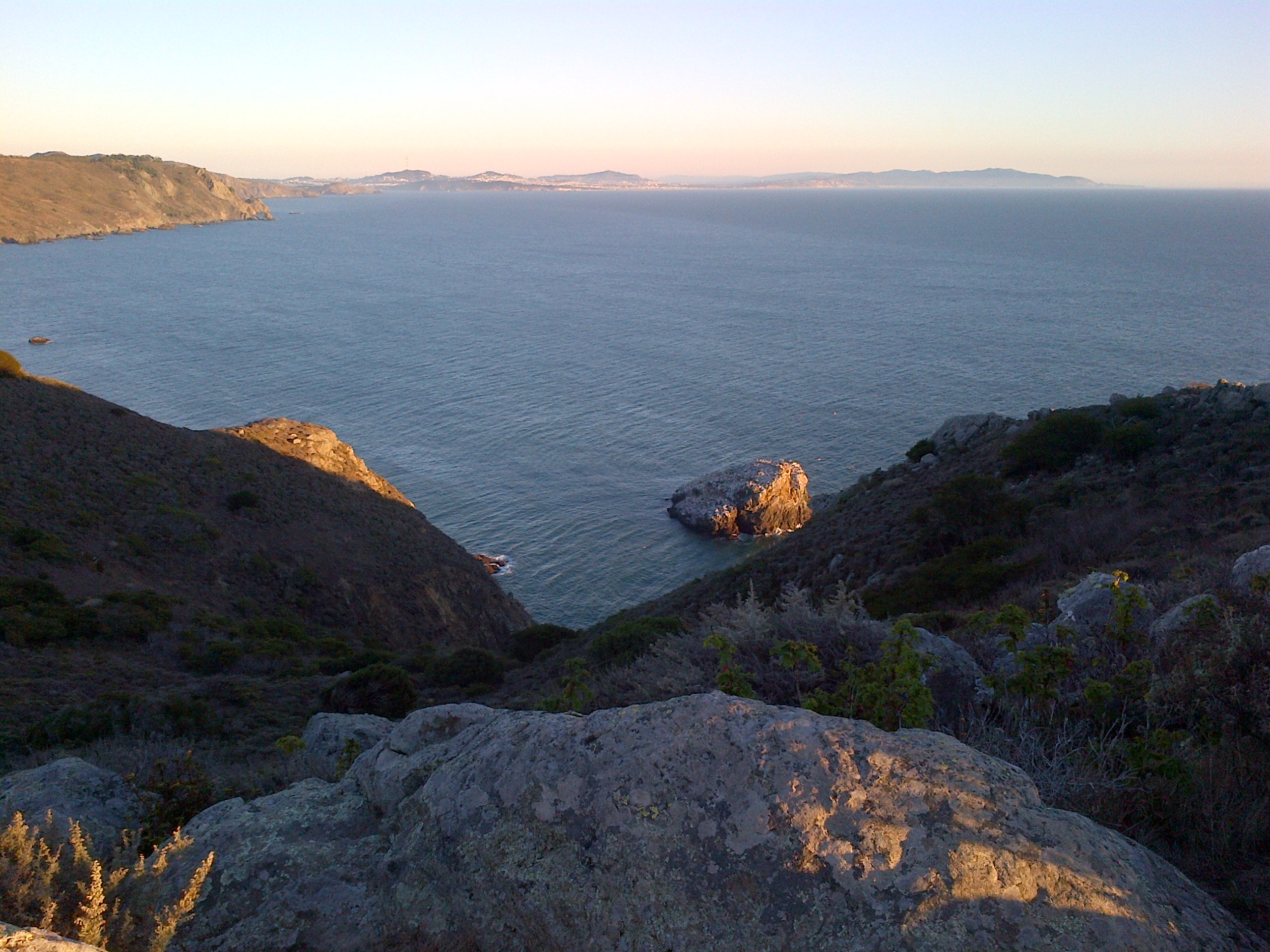 My friend Skip who lives in San Francisco says on weekends he frequently drives out to Highway 1 to walk his dog on a Saturday and/or Sunday morning. 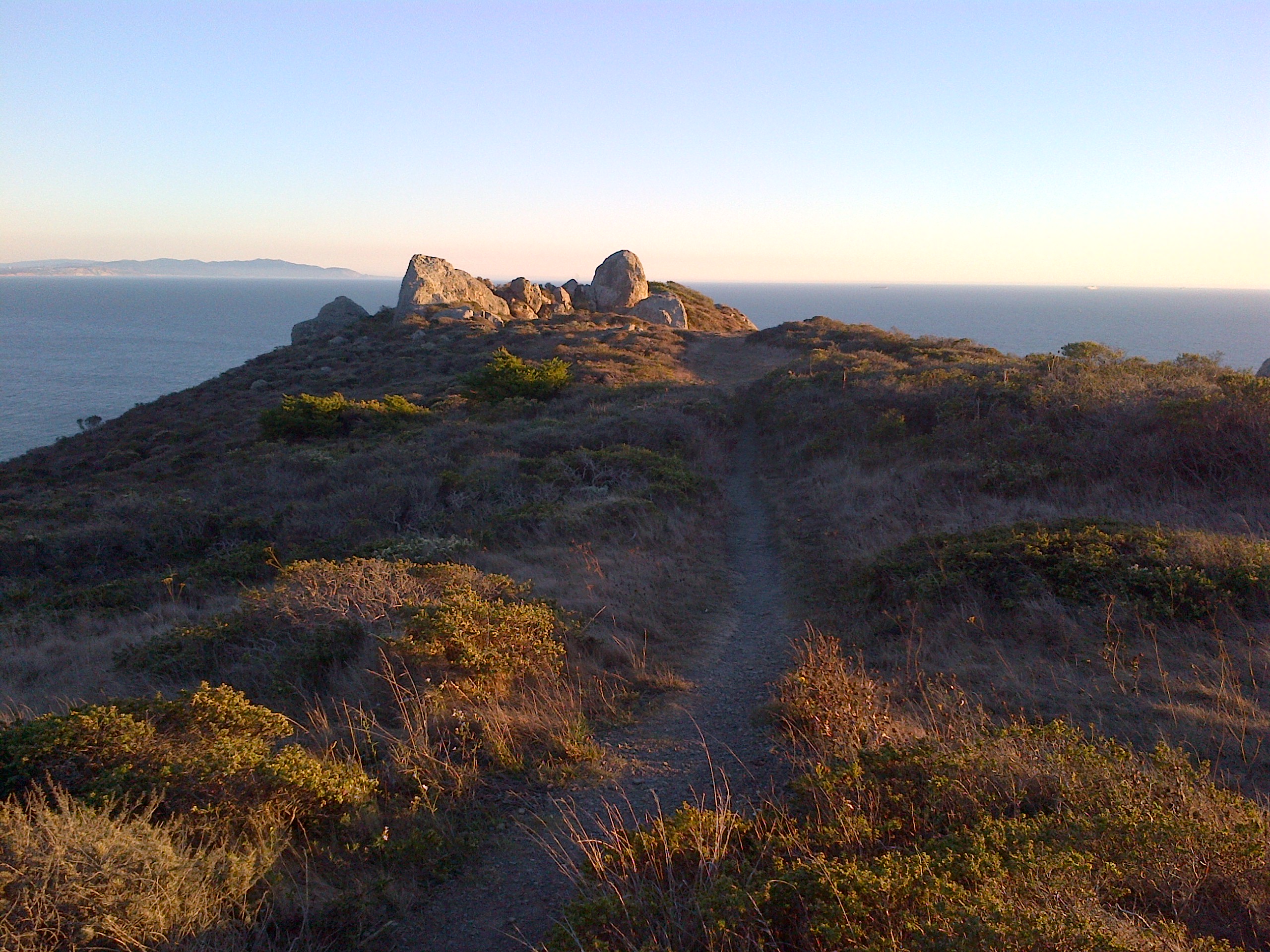 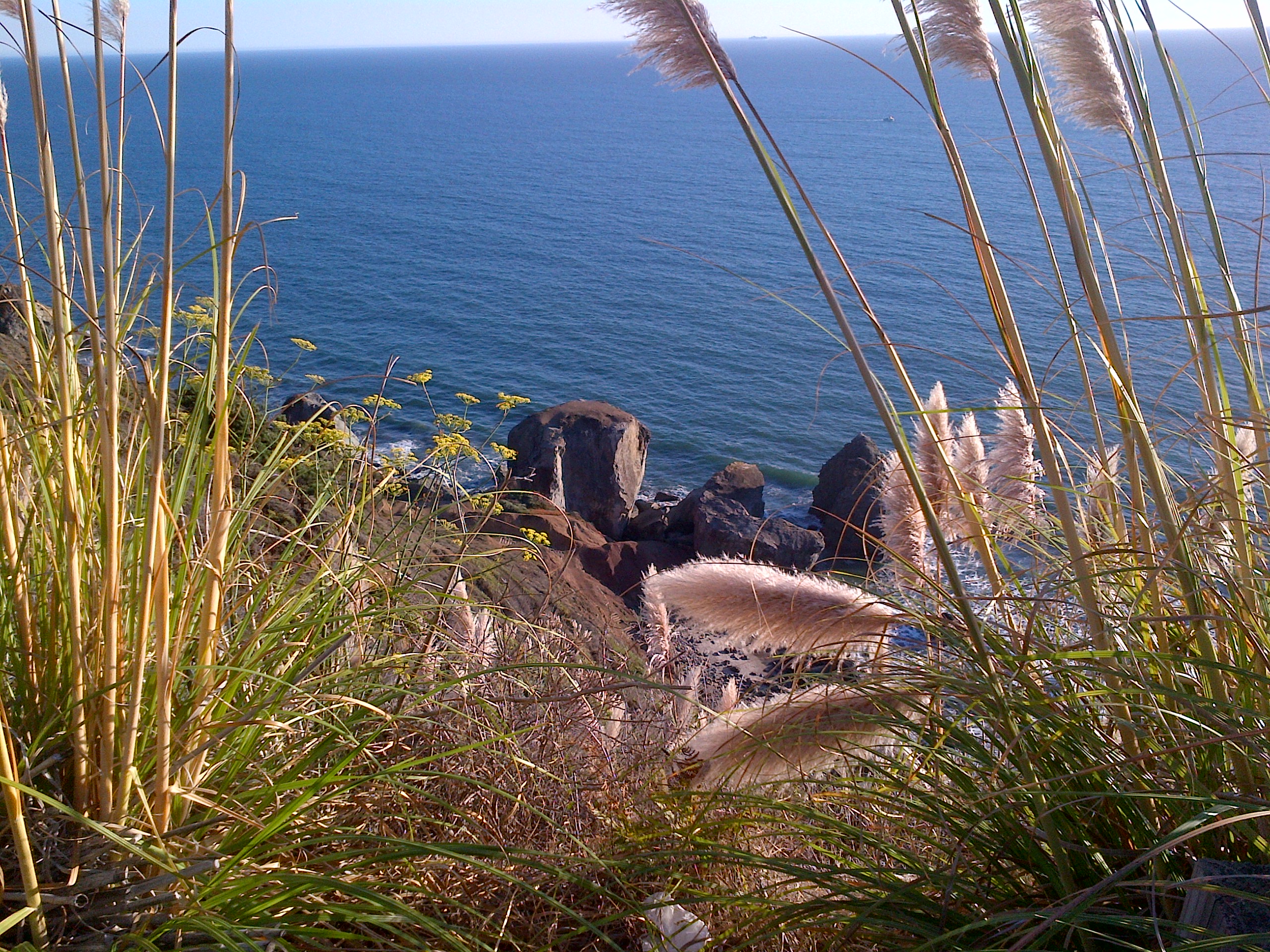 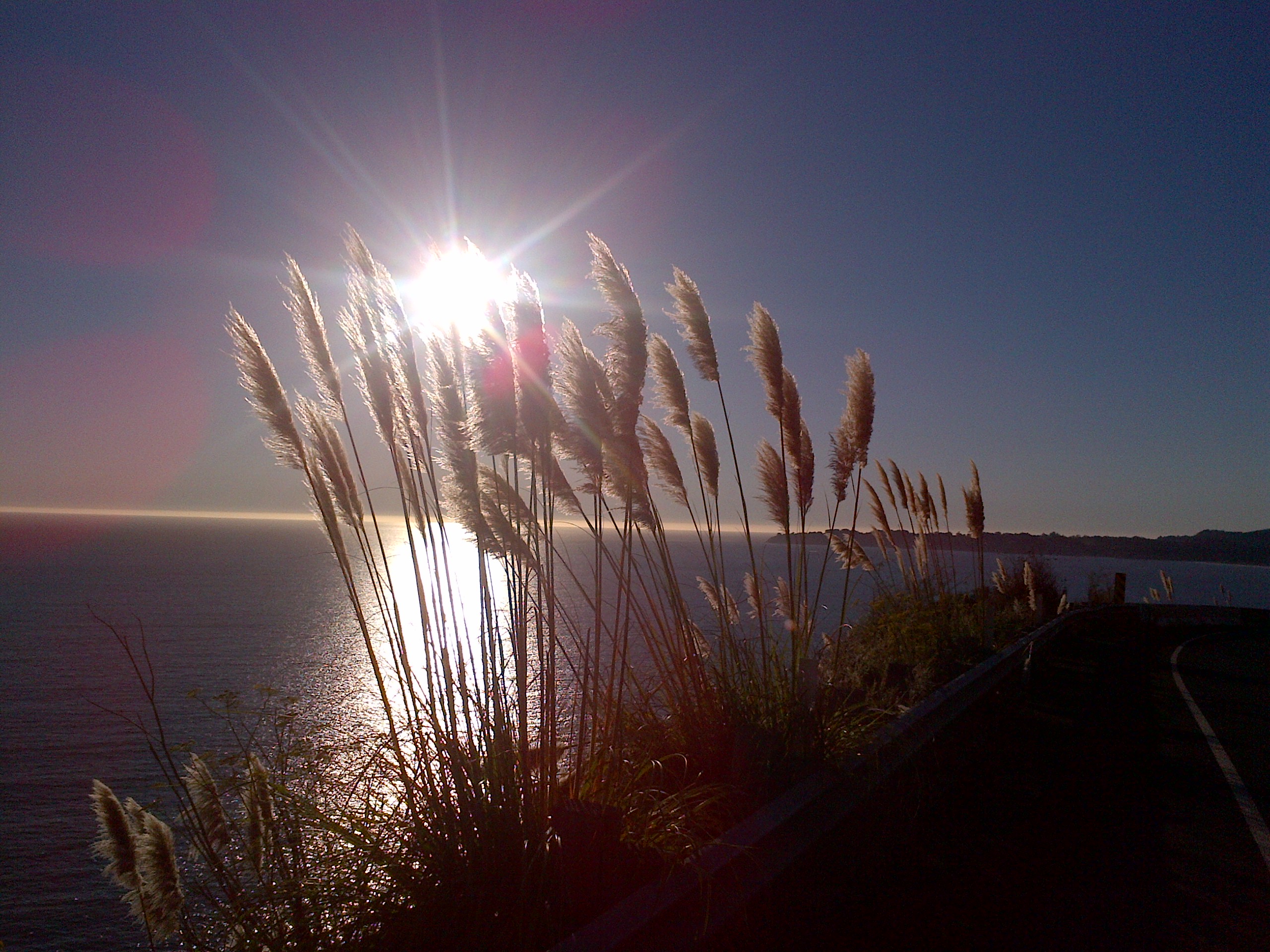 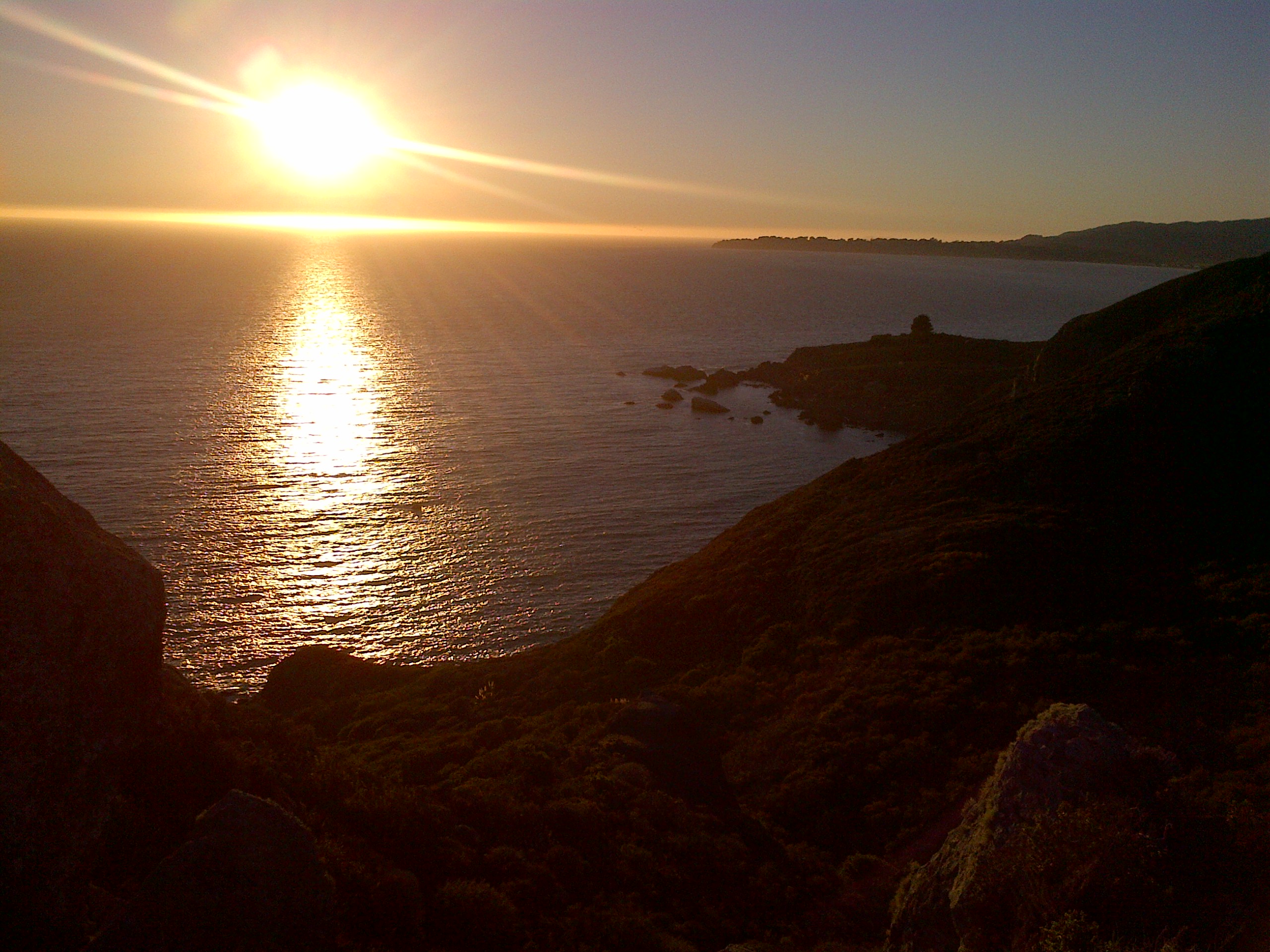 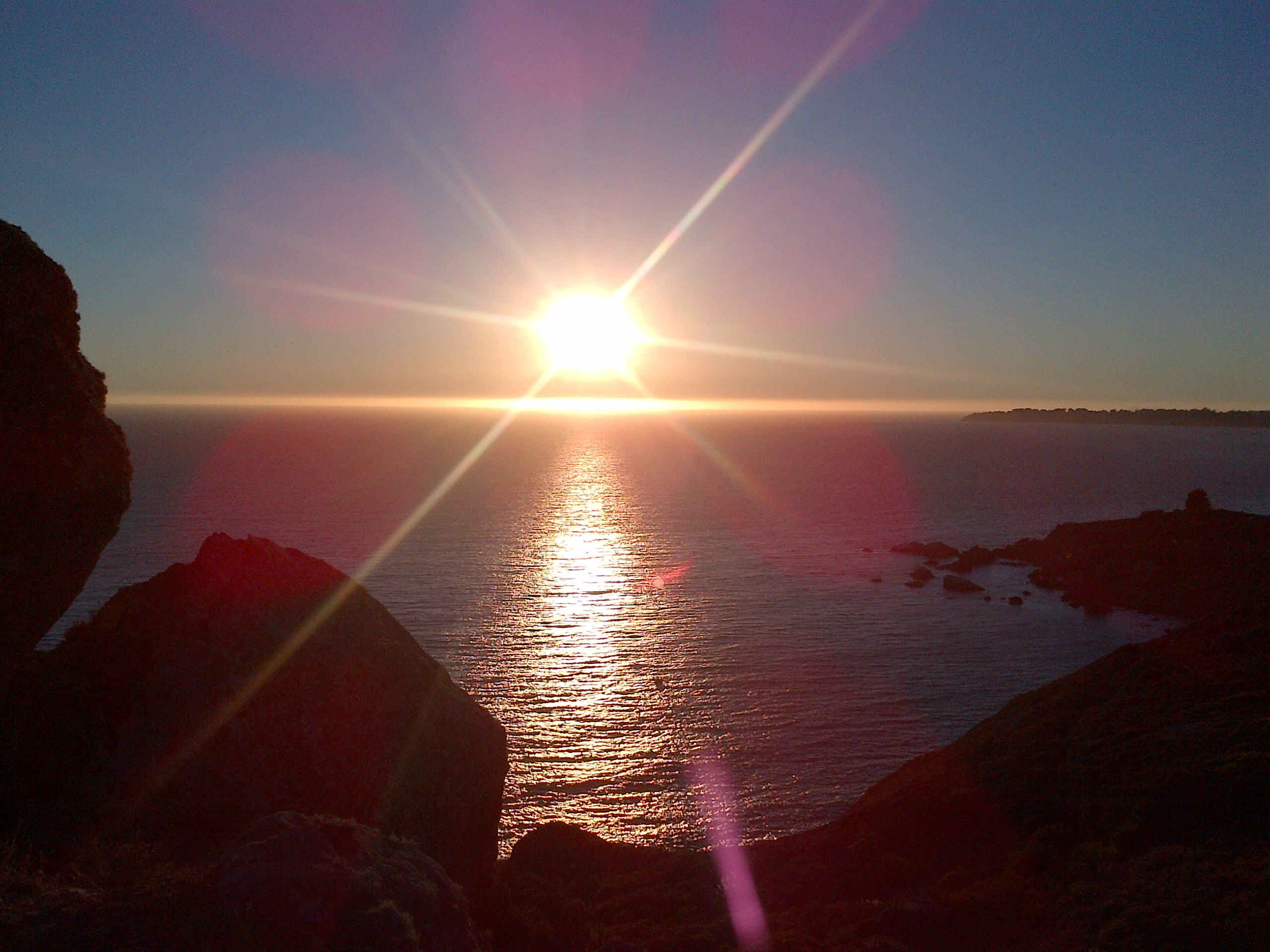 If you are looking to stay in Stinson Beach, versus taking the day trip — Expedia says there are many local cottages to stay at, almost all sold out regularly. For example, a quick search on Expedia at this writing — on March 28, 2021 — still in the middle of Coronavirus lockdowns — for a place to stay in Stinson Beach 4 months from now in July — yields the results below: all cottages sold out. 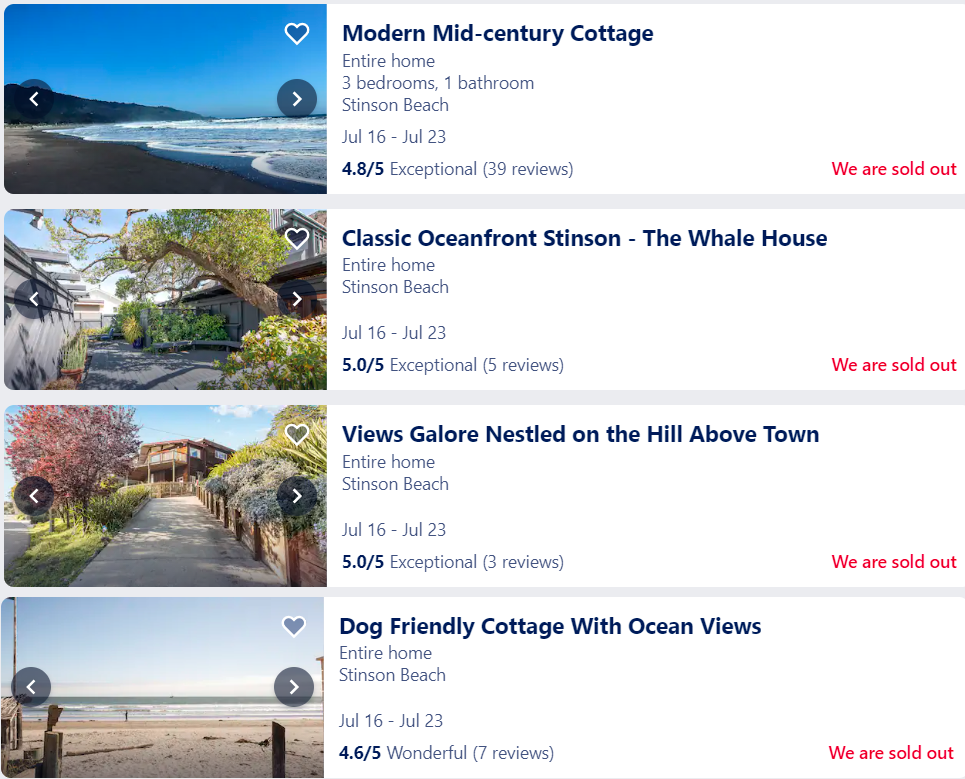 Have you been to Stinson Beach? Are you a native of the area like long-time elementary school friend Chris Carpinello? If you have more info on Stinson Beach please post below.