I spent a week at Cocoa Beach, Florida and worked at the Kennedy Space Center back in March, 2000 — and recently returned. This article gives you a latest view of the area and what to do on vacation there.

I Dream of Jeannie

For the frugal traveler looking to spend time at a Florida vacation spot different than the usual Disney, Miami Beach, Key West, or Tampa spots, look no further than Cocoa Beach, Florida and the Kennedy Space Center.

You might think that there was a time — possibly in the sixties when Anthony Nelson, Roger Healy and Jeannie lived here (or people like them at least) and NASA was in high gear — where this was the place to be. 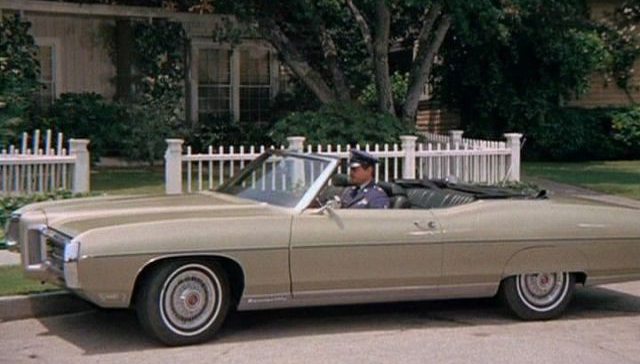 But Cocoa Beach has never been like that. It has been for a very long time a residential community wherein lots of people who work at the Space Center or Port Canaveral live. When I was there for a week in 2000, it was a high-crime area with signs all over the hotel to watch your belongings. But the crime rate for Cocoa Beach has been on significant decline in the last 5 years heading into 2022.

There are no ties to the I Dream of Jeannie tv show at all, sans a plaque at the entrance to Lori Wilson Park, and the naming of the street at that junction, “I Dream of Jeannie Lane”. Nobody has envisioned enough of a business opportunity to build anything that might play off the show — you figure there might be a museum in town, or a mock up of a house that they were supposed to live in, or even a I Dream of Jeanie hamburger joint. Nothing besides the plaque and street sign.

Hotels — All Right Off the Beach

Today there are several high-end resort hotels on the beach (such as Hilton Cocoa Beach Oceanfront), and numerous lower-level-priced hotels right off the beach — the entirety of Cocoa Beach is on an narrow island. And then there is beach, beach, beach, and the Kennedy Space Center, which is a short drive away. 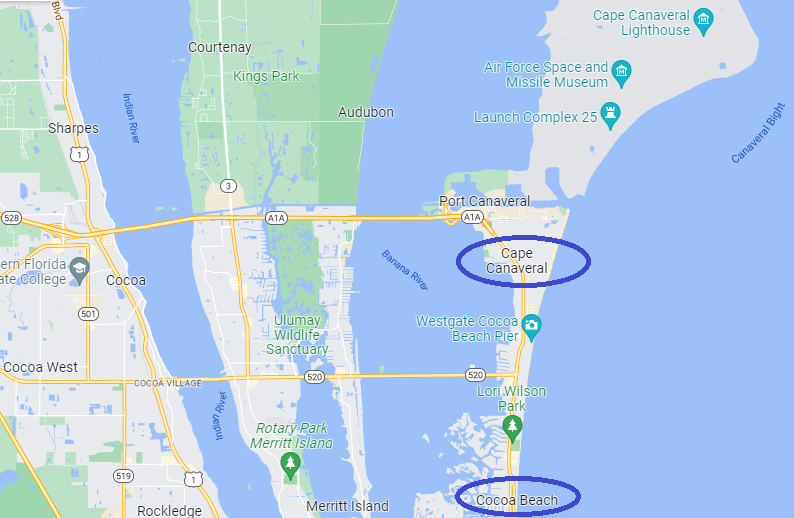 The beach will apparently differ depending on the time of year when you are there. I’ve been there in March — when it is not yet ‘in season’. The beach was relatively quiet with not that many people on it. But pictures that you can find on the internet show a lot of people on the beach during other periods of year. 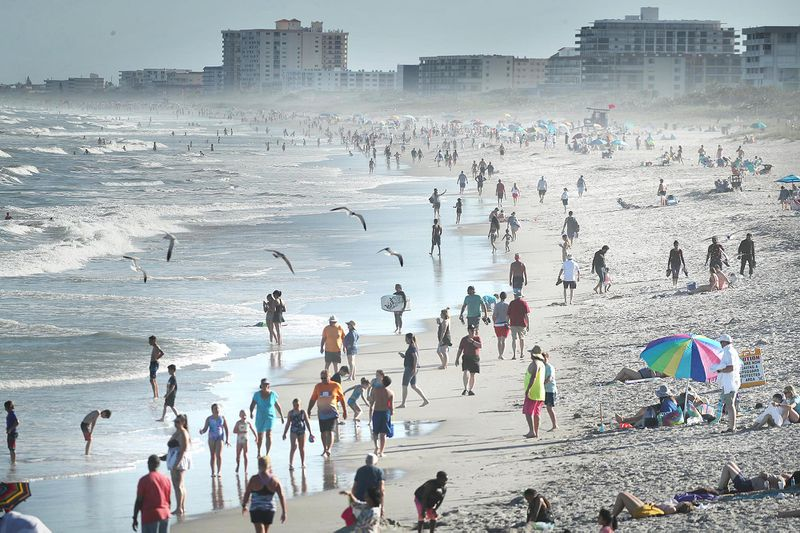 Here is a video of the beach:

Party Going on the Beach

There are some — like writer Matt Meltzer of MiamiBeach411 back in 2011 — who believe Cocoa Beach to have the best weekend beach party in the state of Florida. Every Sunday,  right behind Coconuts on the Beach Bar on Minuteman Causeway,  hundreds of 18-34 year-old American partiers — many coming from local colleges like University of Central Florida and local community colleges — cram the sand for what one writer described as a “reigned-in Spring Break”. 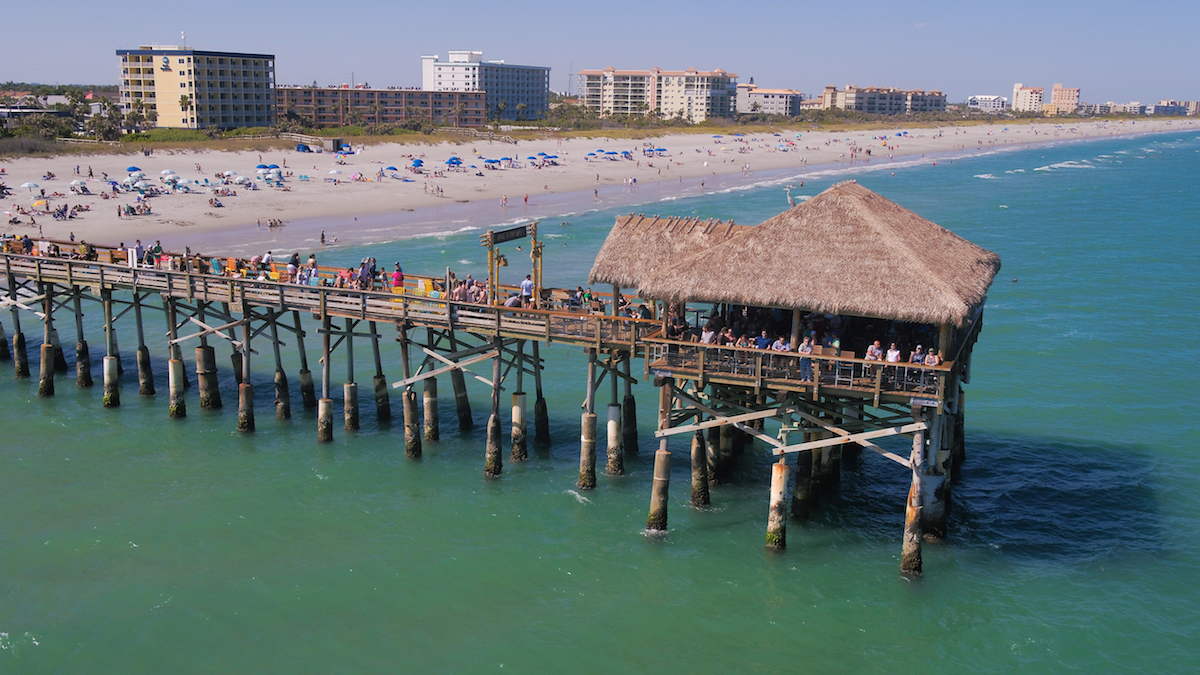 Kennedy Space Center is HUGE; like twice the size of Staten Island. When I taught a training course there on software development in 2000, the map they gave me was so misleading. The morning of the first class, I got to a guard gate 10 minutes before the course was to start, thinking I was 5 minutes away from the training building, and the guard told me I’m 18 miles away. Holly shit. I was late for the class.

Elon Musk’s SpaceX launches its rockets at Kennedy Space Center, with NASA crew on board. You can:

The schedule for upcoming launches is here. 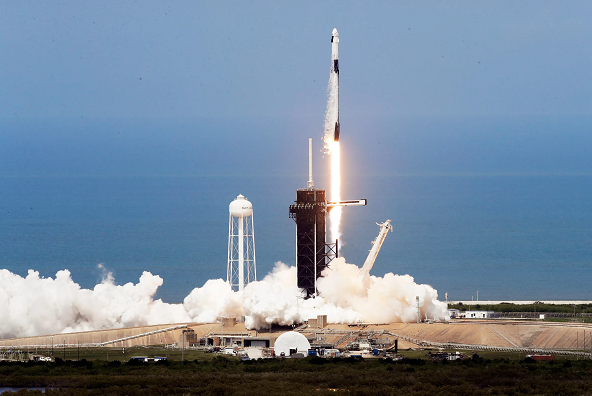 Back 20 years ago when I spent a week teaching a training class at Kennedy Space Center — the thing that really blew me away about the place was it was my first close encounter with alligators. As you drive through the center, there are waterways along side the road — canals I guess you’d call them — and as you drive by, you see an occasional alligator swimming by.

My final afternoon there, I stopped my rental car at the rear of an office building’s parking lot, got out, and nearly stepped on one lying in the grass on the banks of the canal. Lying there motionless as if dead; but of course I’ve seen enough nature shows on tv to know it wasn’t dead. Took me a while to realize not 20 feet away there was another one, and another one’s head was in the water nearby. The place was literally infested with them. Imagine trying to swim through that canal… I found it really incredible that the people working at the Kennedy Space Center work, and get in and out of their parked cars, in such proximity to these alligators all around.

Lori Wilson Park, in the heart of Cocoa Beach, has restrooms and outdoor showers.