Take me home, country roads, to Harper’s Ferry, West Virginia — a charming, old Civil War town settled on the steep hill overlooking the spot where the Shenandoah River breaks off from the Potomac River in the Northern part of the state that hangs over Virginia and is adjacent to Maryland.

It is a picturesque and historic town. A railroad runs through it. There are the rivers — not one but two. It was an important strategic junction during Civil War times.

Most of the buildings in the center of town are of that vintage, and placed on the steep hill that runs down to the river. There are cafes and outdoor dining, and from some of those outdoor dining spots you overlook the river(s).

I was working in Winchester, Virginia but had some time on a Wednesday afternoon about 2 pm, so lit out first I could to what looked like the nearest, interesting place in West Virginia — Harper’s Ferry. It would be my first time in the state of West Virginia. 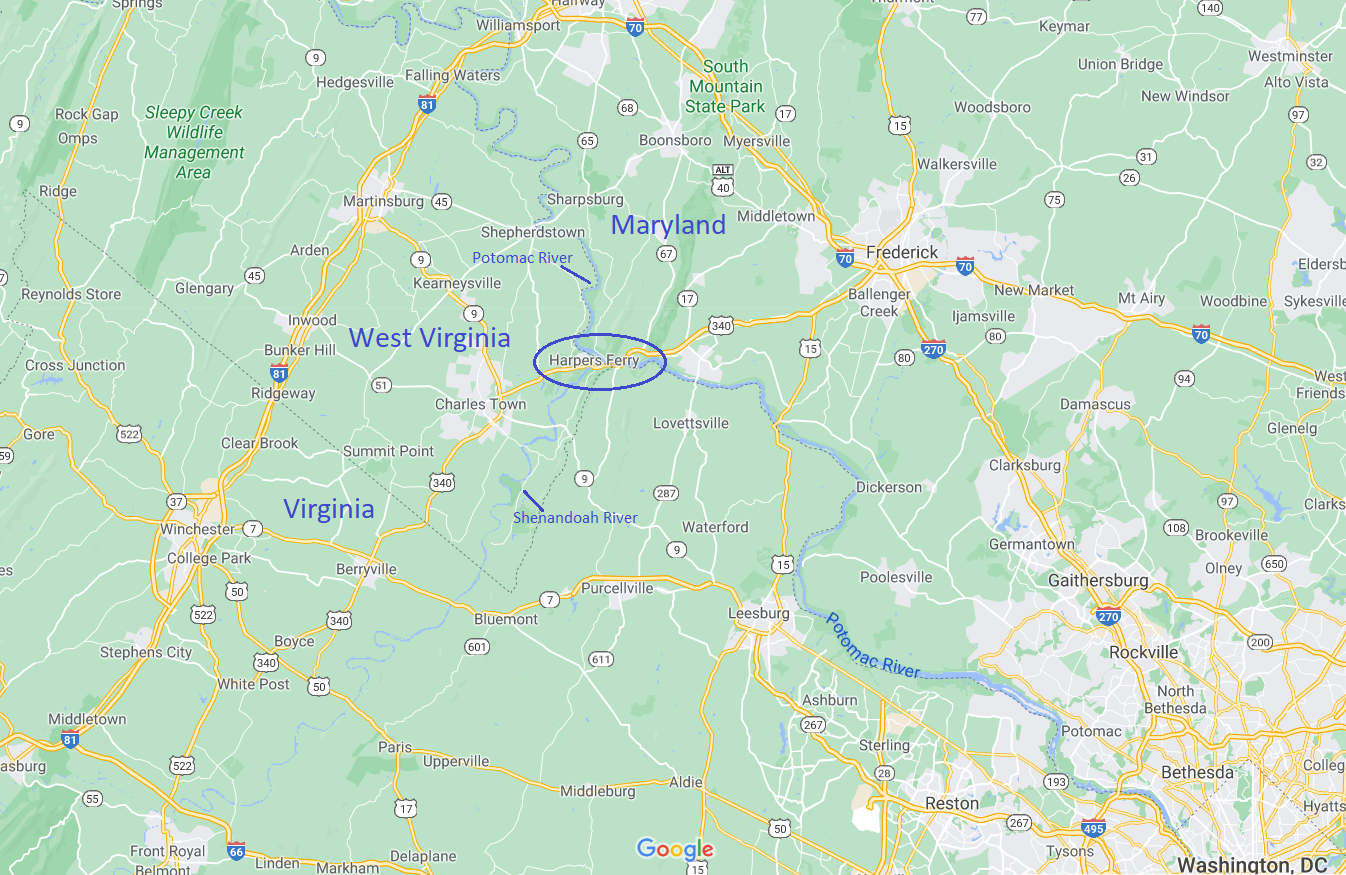 For You to get to Harpers Ferry:

Twenty minutes after hitting the West Virginia border heading North I came upon a sign for the Harper’s Ferry historical park. I drove into that park, which placed me in a parking lot. I walked over to some bathrooms and found a bus that was waiting in the now pouring rain, which advertised a ride into the historic center of town.

I figured if a bus tour was needed into town — you probably could not drive there. I asked the woman at the wheel if it was a free ride, and she said yes indeed it was; last pickup back was at 5:15 pm. I would have over an hour to knock around town.

So I rode the bus. 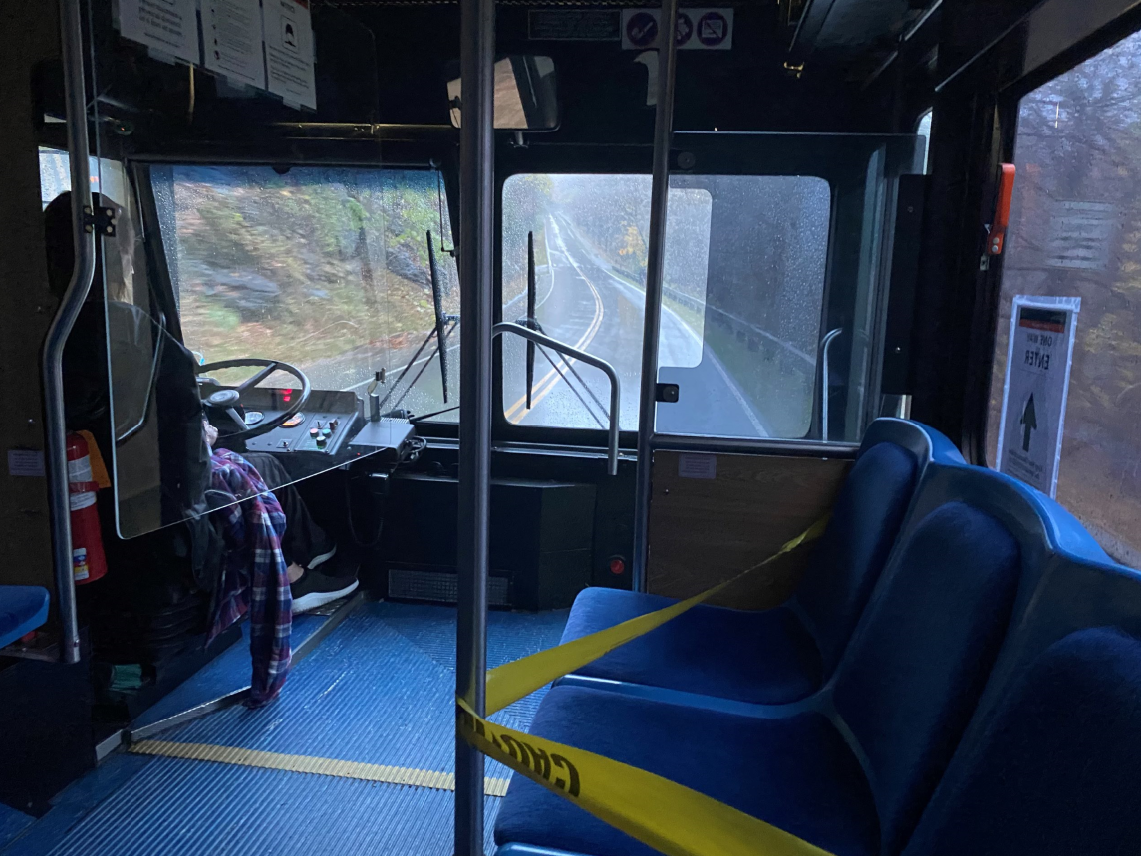 In 10 minutes I was left off a block from the center of town, and walked to the first place I could to get out of the pouring rain — a museum store.

Later I found out that there was plenty of parking in center of town, including a parking lot — with paid parking. Had I just made a left when I made the right to go into the park above, I would have simply driven my own car into Harpers Ferry instead of taking the bus.

2. Walk the Bridge Over the Rivers

Once in Harpers Ferry, if it is not pouring rain, the first thing you might want to do is walk over the bridge that crosses the Shenandoah River where is breaks off from the Potomac River. It is a gorgeous walk, and the bridge is also used for railroad trains.

You get a great view of the rivers from the bridge. If it is your lucky day, a passenger or freight train might go by. I was not so lucky. 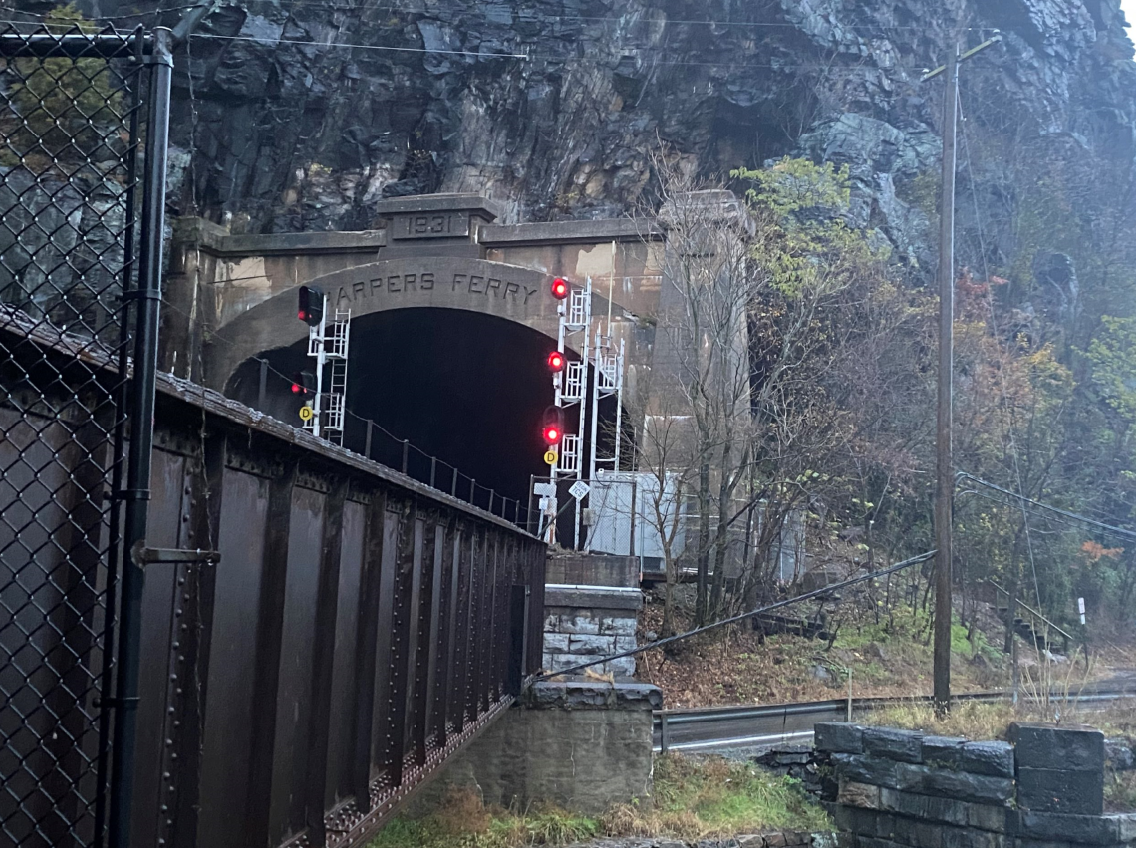 3. Walk Into the Museum Buildings

Harper Ferry center of town has several museum buildings that are actually vintage shops made to be as they would be in the Civil War. You can walk in and put yourself back in time. 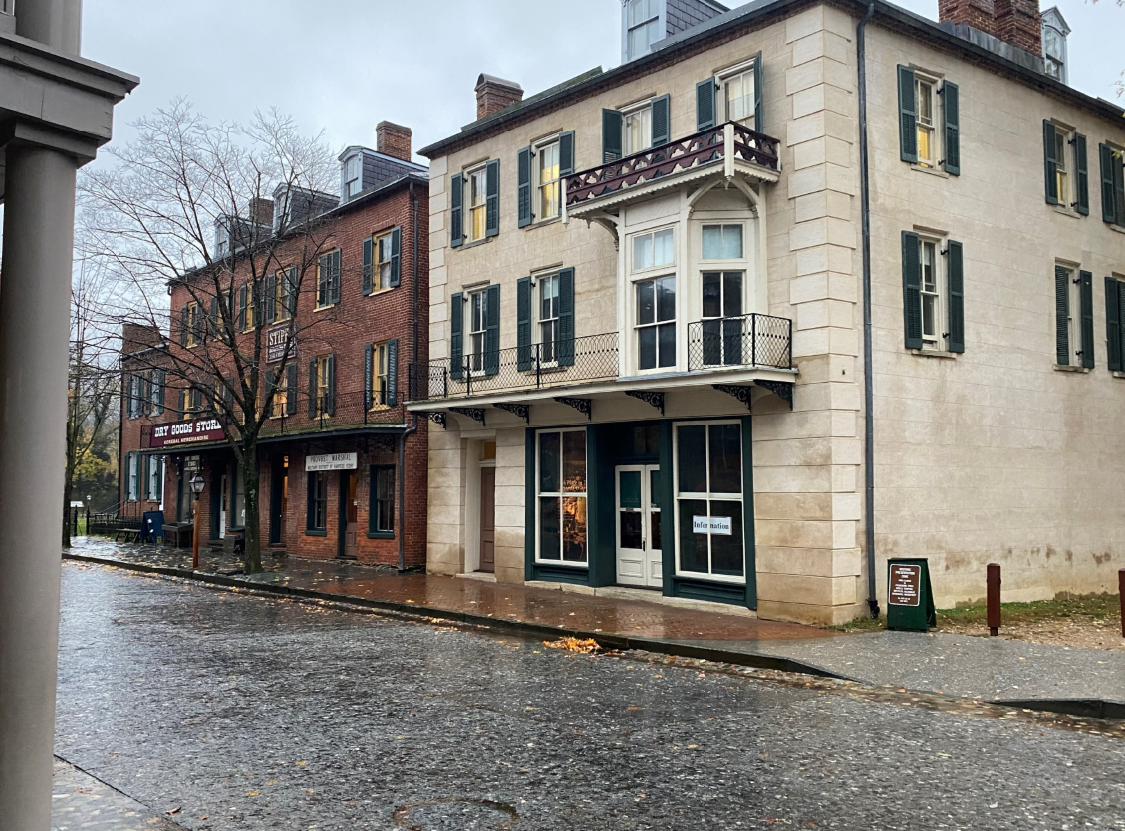 There is also a John Brown Museum that details the events that started the Civil War. 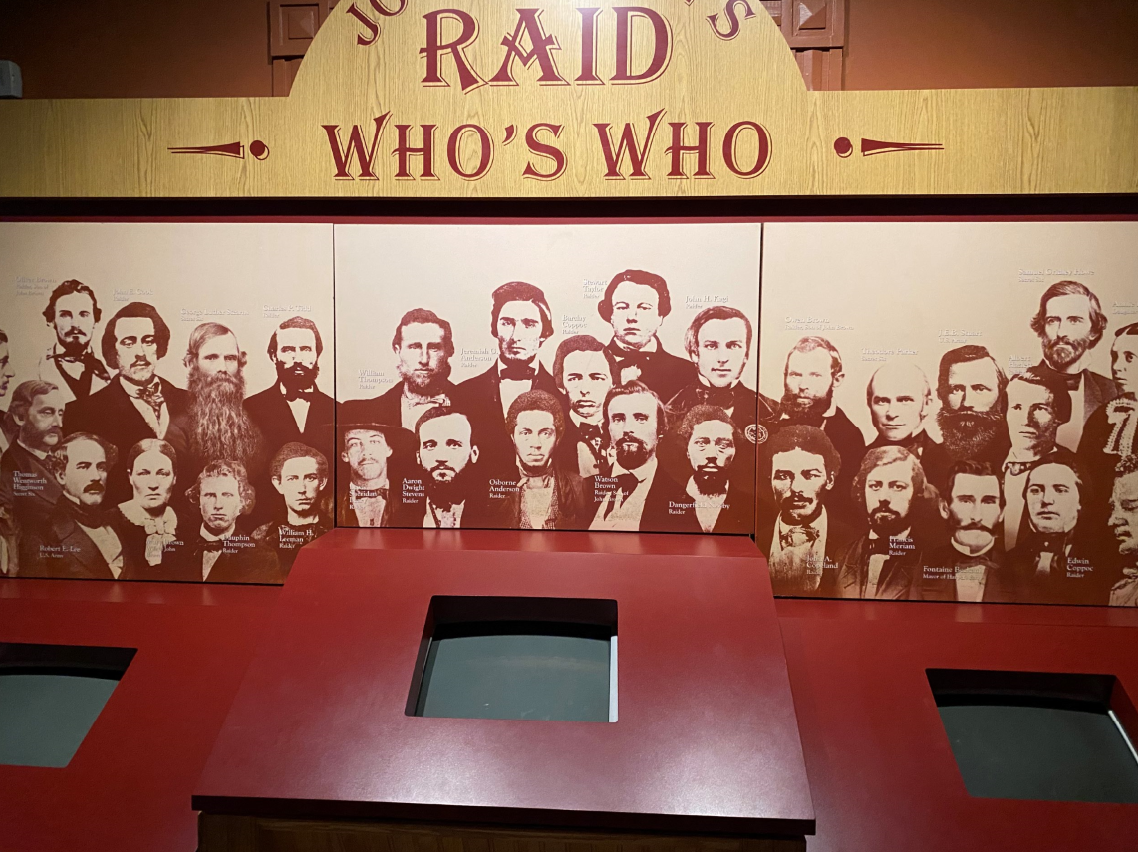 4. Stop by the Train Station

The local train station is a historical building that goes back to the Civil War. A part of it is cordoned off as a museum; a part of it is still used as an active station today. 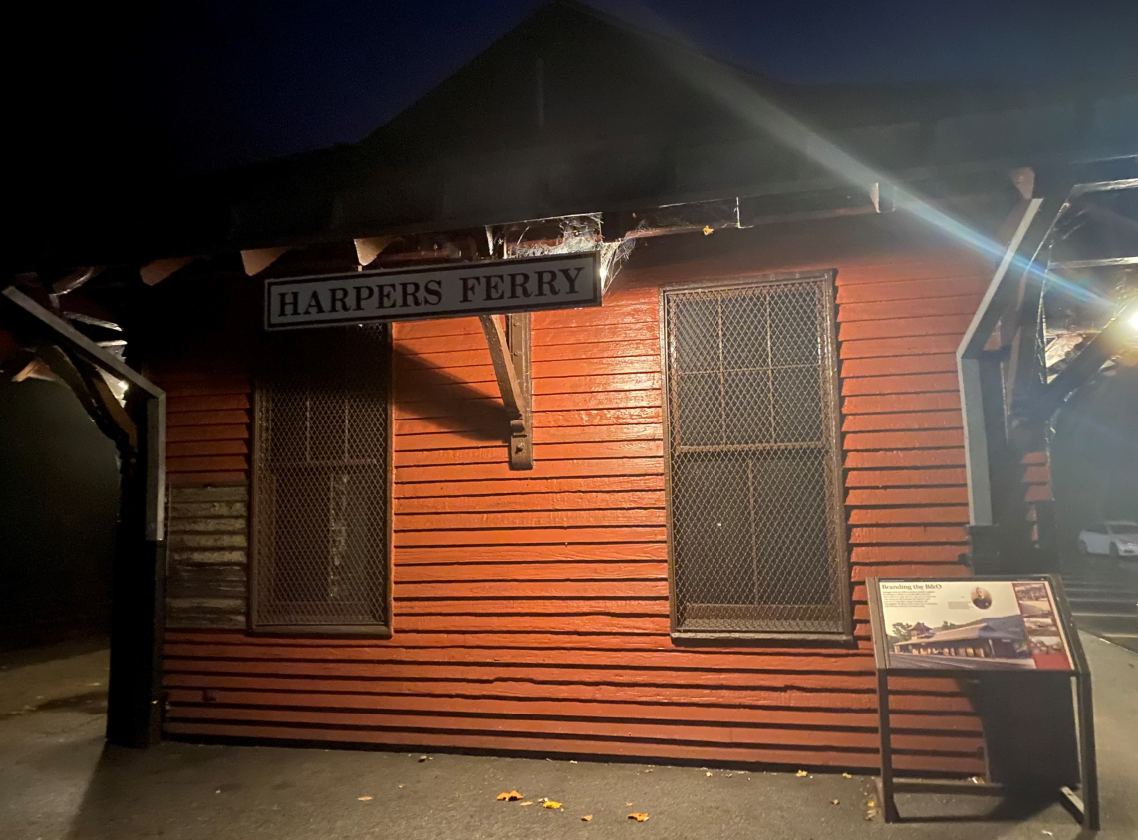 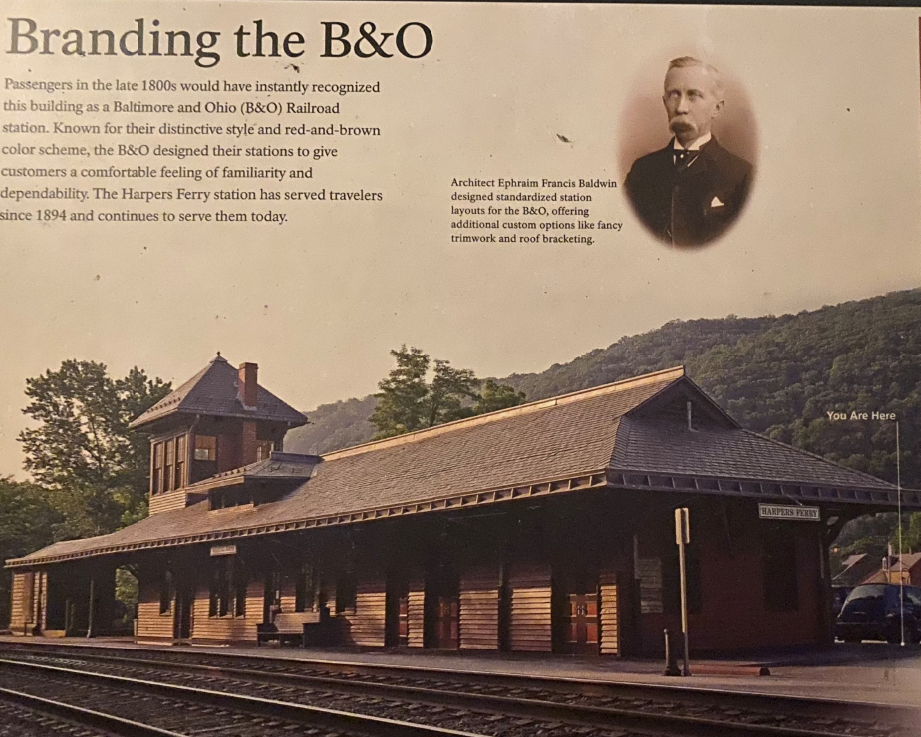 The tunnel underneath the train station, allowing people to walk under the tracks to get to the tracks heading in the other direction — is filled with Graffiti and the smell of piss. When I was there, an all-seeing eye was painted on the wall — sign of the times and perhaps a warning. I would bet there were hidden cameras somewhere, although they didn’t deter the artists. 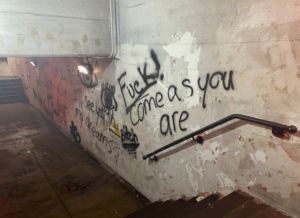 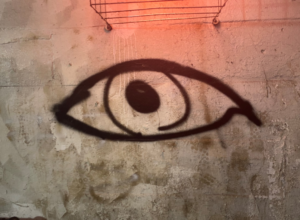 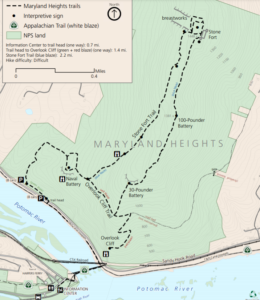 On the other side of the bridge, by the railroad tunnel is Maryland Heights — a historical park that offers hiking trails that allow you to access an old stone fort and several Civil War canons and an old Naval Battery.

I didn’t have time to hike them but there are numerous sites that detail the hikes, including Mountain Project that says, “To climb on Maryland Heights it is REQUIRED to sign in at the ranger’s information station it’s easy and doesn’t take long. Not signing in may result in a $150 fee. This is the only cliff in the Harpers Ferry area that one needs to sign in for. The rangers often get reports from non-climbers that someone has climbed up onto the cliff and are in trouble. So by signing in the rangers know who should be on the cliff and who should not be. The rangers ask you to sing out however if it’s after hours 5:00pm and the station is closed there is no need to worry about it. ” Love that last line.

In addition, battlefields.org says, “When Stonewall Jackson’s Valley campaign was in full swing in May, 1862, Federal engineers hastily laid out the Naval Battery, manned by gunners from the Washington Navy Yard. It was located on a plateau one third of the way up Maryland Heights and could fire on almost any spot in town as well as on Bolivar Heights. ”

Harpers Ferry is filled with eateries nestled densely against one another on the steep hill that climbs up from the rivers. I didn’t get a chance to eat in any of them but an internet search will give you reviews. 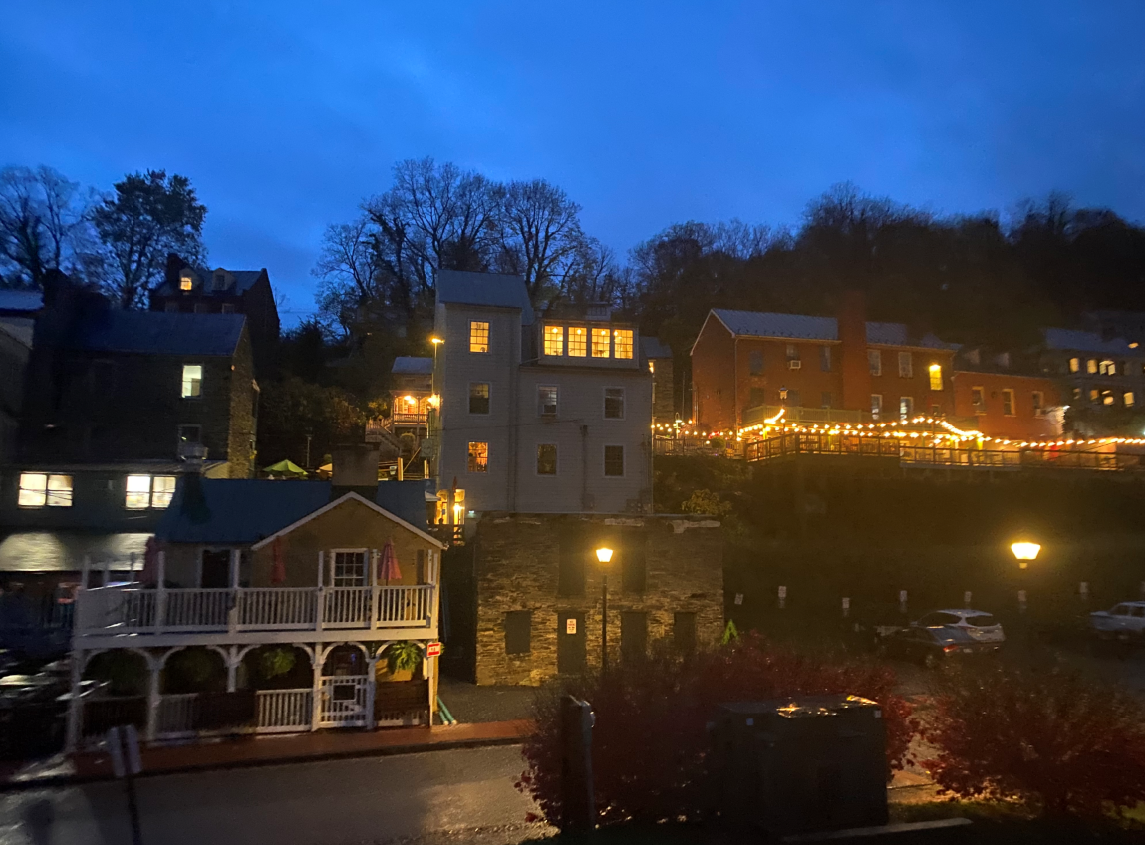 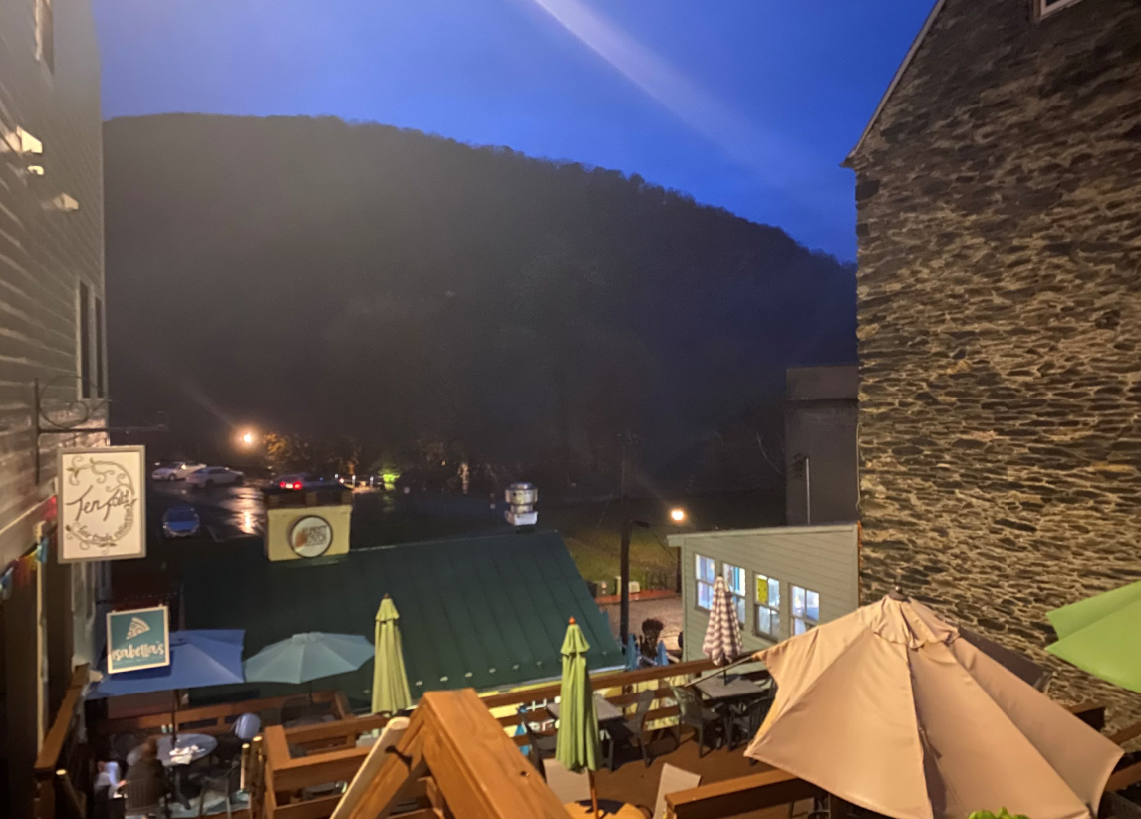 On a second trip to Harpers Ferry on the same work assignment I was doing over several months in Winchester, I arrived at the town at 9:15pm at night, intent on walking around the town to take in the historic buildings, while smoking a Padron 1964 Anniversary cigar I had just bought. Every once or twice a year if work has been successful and mostly finished, I like to smoke a cigar in a Civil War battlefield or area — to think about next steps, and to help put myself back in time to that time — when cigar smoking was common; General Grant is said to have smoked 12 cigars a day to help ease the tension. 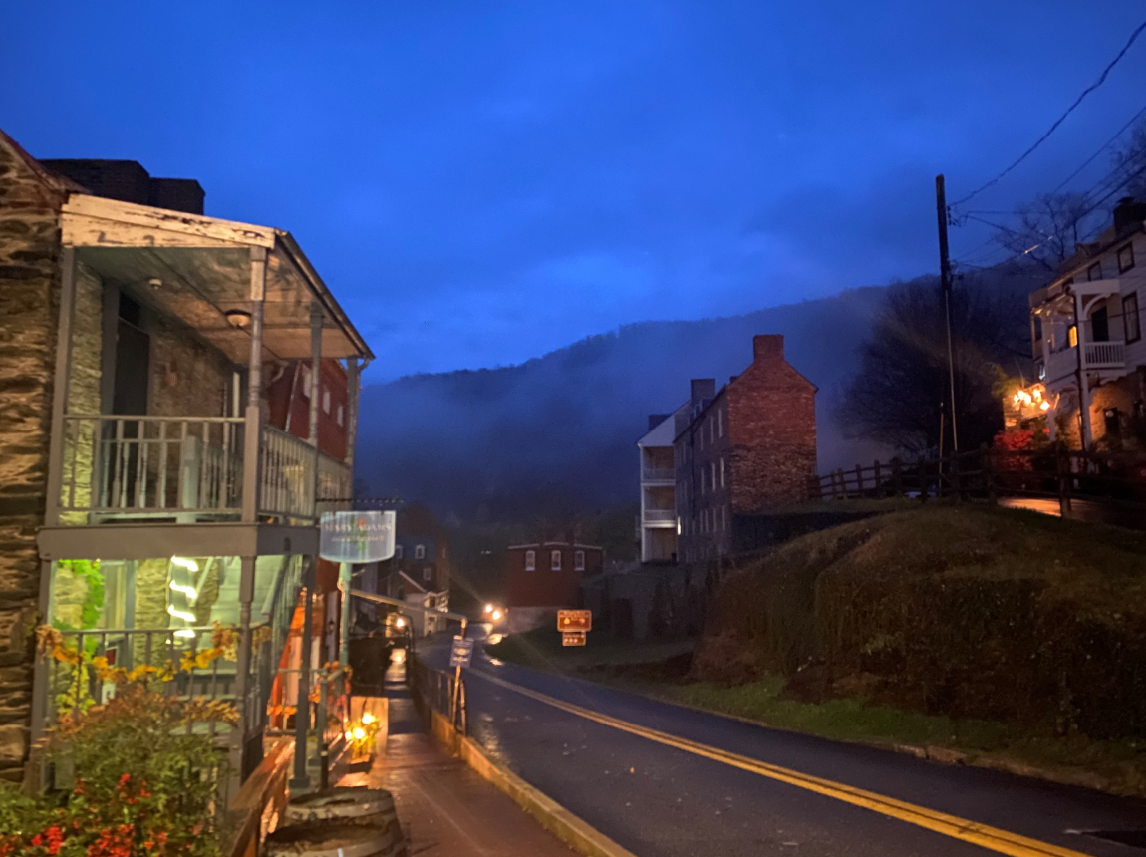 I drove to the center of town only to find it completely deserted — except for a Sheriff’s car that was idling in the parking lot by the train station — there on sentry observing anything that went on center of town. I thought about the graffiti in the tunnel underneath the train station; maybe they were there to discourage that.

This was in March 2021 during Covid so it’s hard to say if this was normal for Harpers Ferry: for it to be completely deserted at 9:15 pm on a Weekday night. In any case it seemed like an inopportune time to light a cigar and start walking around town — an open invitation for the guys in the Sheriff’s car to drive over and ask me what I was doing. I thought about it twice actually — left then drove back to center of town — but again with not a single person on the streets — drove off to find another spot to smoke my cigar.

Have a Cigar — Take in Civil War Campground Ambience

So I sat in the campground, envisioning what it was like to be in this campground as a Union soldier during the Civil War. 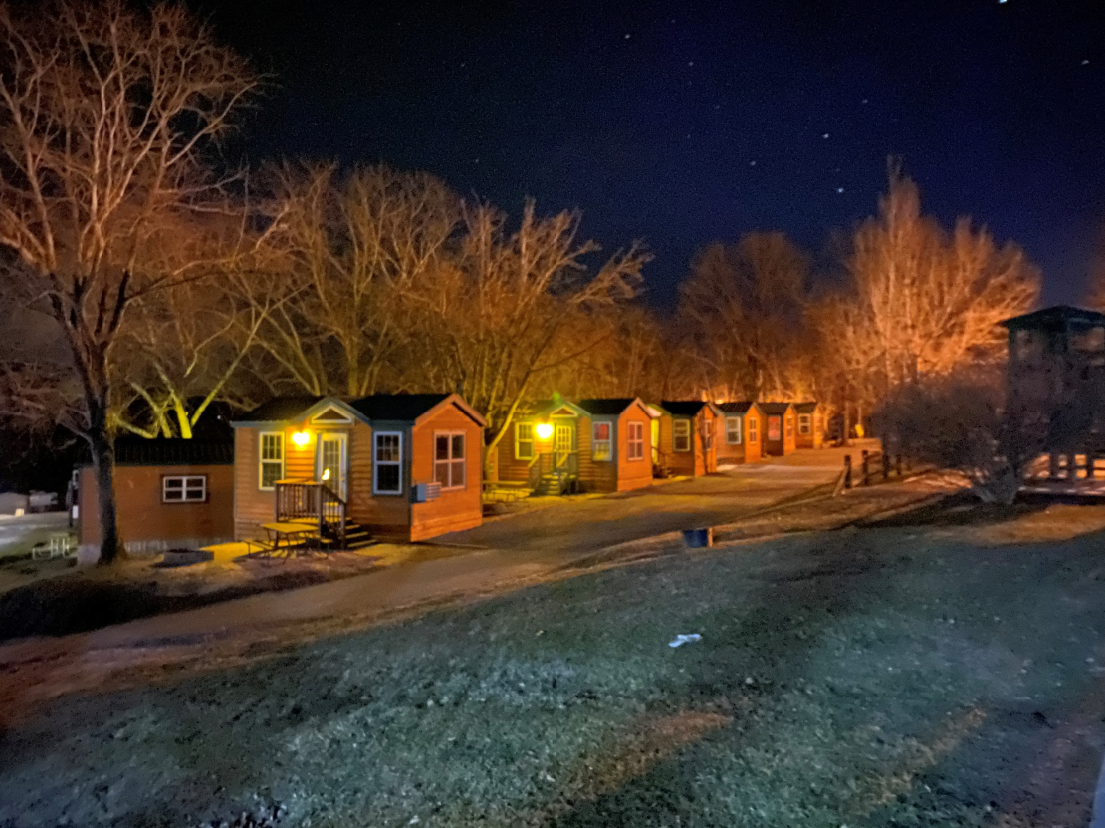 I hadn’t been in a campground since college and forgot how enchanting they are.

The relaxed quietness of it — in the woods, with sound of night conversation amongst campers here and there a few hundred yards off. You are at one with nature, and people who enjoy the outdoors. The smell of wood fires. The rippling of the flags on the flag pole. And then — in this campground — the sound of a far off freight train.

As I walked around the campground, I noticed a Civil War event plaque — these plaques are all over the Shenandoah Valley in Virginia, detailing a Civil War event that happened at the location. This plaque detailed that this campground was the camp of the Union soldiers at the beginning of the Civil War. It reads:

“On Sept 12, 1862, Gen Stonewall Jackson’s forces approaching from the West were shelled by 2 Union artillery guns under Col Miles from this position.”

On Sept 14, Gen Hill outflanked these Union troops while Jackson swept past this location. Colonel Miles surrendered over 11,000 men and valuable military stores. On Sept 18 he was killed by a stray bullet” 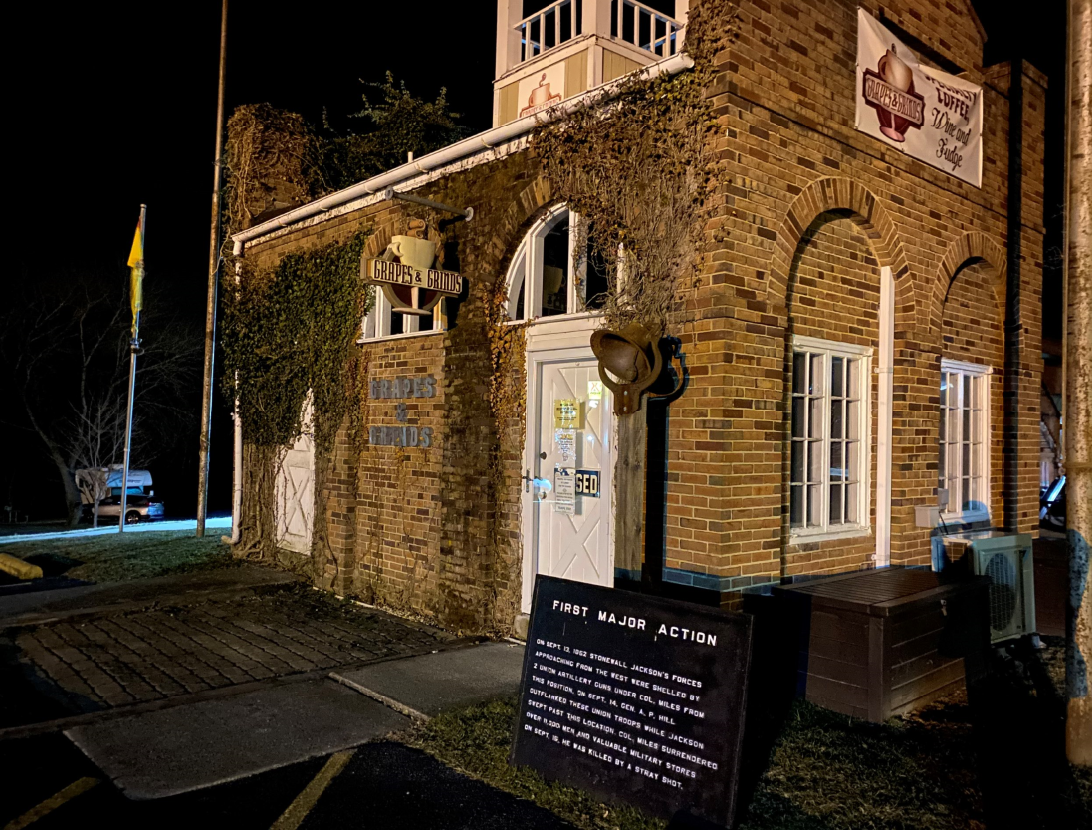 So here I was in the same spot those Union soldiers had been, surveying the same stars above. This camp is just above the intersection of the junction where the Shenandoah River branches off from the Potomac River. 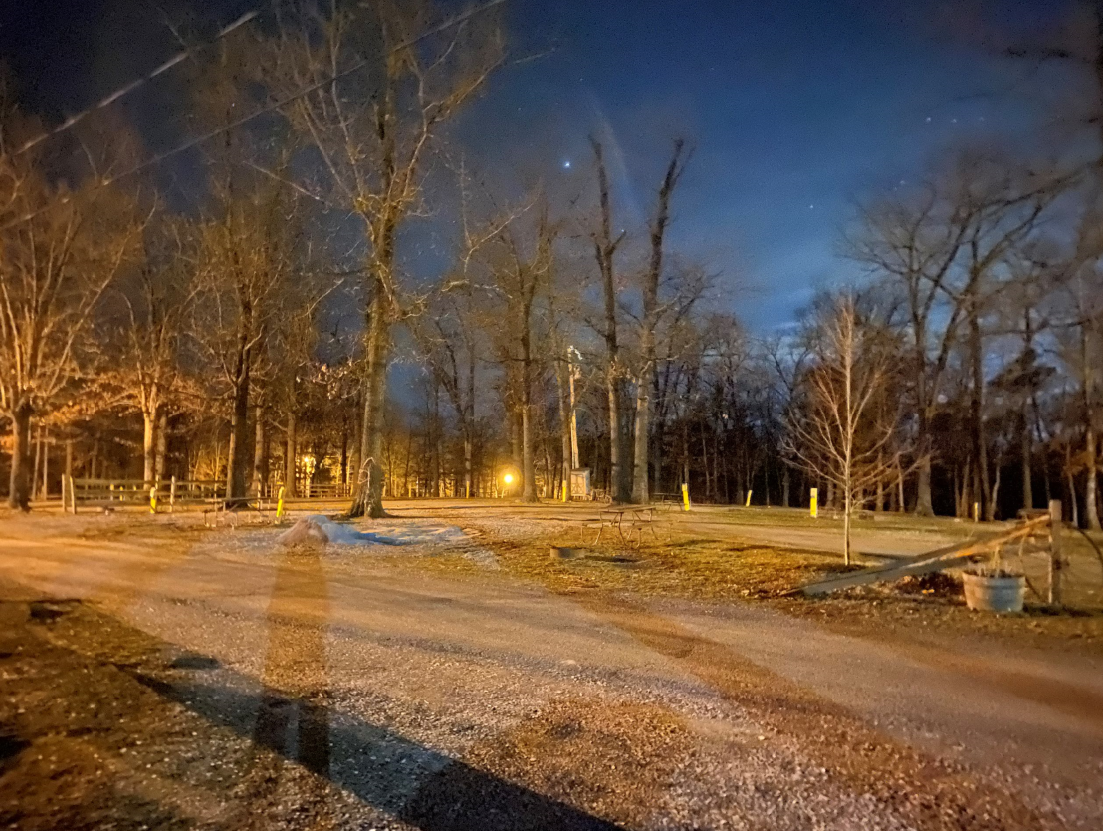 So I imagined to be on the lookout for Confederate soldiers; not to get surrounded like Col Miles did.